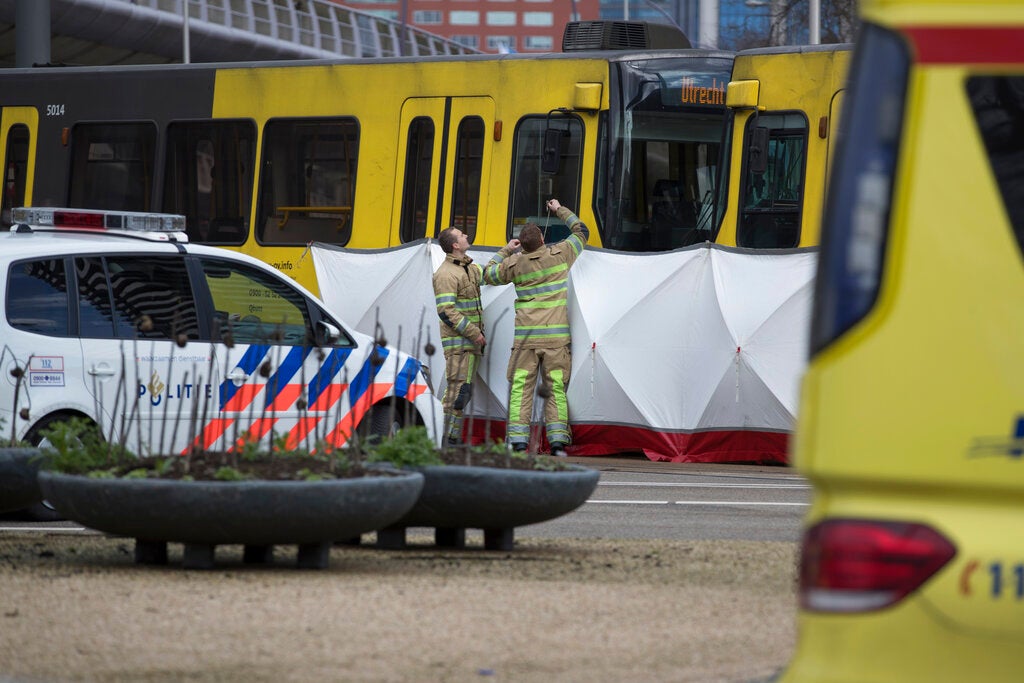 Rescue workers install a screen on the spot where a human shape was seen under a white blanket following a shooting in Utrecht, Netherlands, Monday, March 18, 2019. Police in the central Dutch city of Utrecht say on Twitter that “multiple” people have been injured as a result of a shooting in a tram in a residential neighborhood. (AP Photo/Peter Dejong)

THE HAGUE, Netherlands — Dutch police were hunting down a suspect after a shooting Monday on a tram in the central city of Utrecht that left one person dead and multiple people injured.

Authorities immediately raised the terror alert for the area to the maximum level and said they are considering the possibility of a “terrorist motive” in the attack. Dutch military police went on extra alert at Dutch airports and at key buildings in the country as the Utrecht manhunt took place.

Police, including heavily armed officers, flooded the area after the shooting Monday morning on a tram at a busy traffic intersection in a residential neighborhood. They later erected a white tent over an area where a body appeared to be lying next to the tram.

Utrecht police said trauma helicopters were sent to the scene and appealed to the public to stay away. As the manhunt continued, heavily armed anti-terror officers gathered in front of an apartment block close to the scene.

Police spokesman Bernhard Jens said no one had been detained yet in the shooting, and one possible “explanation is that the person fled by car.” He did not rule out the possibility that more than one shooter was involved in the attack.

“We want to try to catch the person responsible as soon as possible,” Jens said.

A German police spokesman said German authorities near the border were initially told to look out for a red Renault Clio compact sedan but were later told it had been found abandoned in Utrecht. There was no immediate confirmation on that from Dutch police.

The Netherlands’ anti-terror coordinator raised the threat alert to its highest level around Utrecht. Pieter-Jaap Aalbersberg said the “threat level has gone to 5, exclusively for the Utrecht province.”

“The culprit is still on the run. A terror motive cannot be excluded,” he said in a Twitter message.

After the shooting, Dutch political parties halted campaigning ahead of a provincial election scheduled for Wednesday that will also determine the makeup of the Dutch parliament’s upper house.

In neighboring Germany, police stepped up their surveillance of the Dutch border. Heinrich Onstein, a spokesman for federal police in North Rhine-Westphalia state, said additional officers had been detailed to watch not only major highways, but also minor crossings and railway routes.

German police are in close contact with authorities in the Netherlands and have a description of the suspect, he said, but would not elaborate for security reasons.