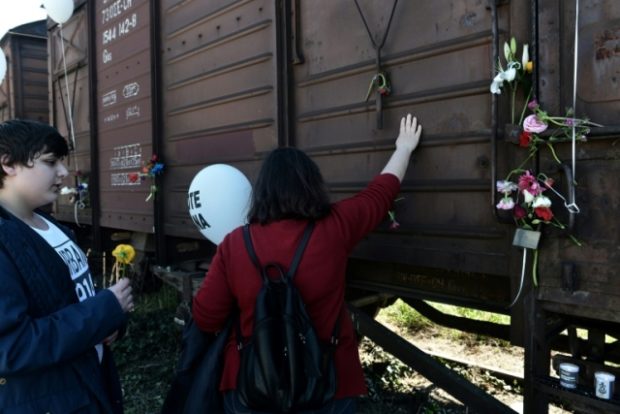 The silent march marked the 76th anniversary of the first train out of Thessaloniki to the Nazi death camps. Image: AFP/Sakis Mitrolidis

Two thousand people held a silent march in Greece’s second city Thessaloniki on Sunday, marking the anniversary of the departure in 1943 of the first train taking members of its Jewish community to the Auschwitz death camp.

Participants held white balloons bearing the message “Never Again.” They gathered at the city’s old railway station where that train pulled out on March 15, 1943.

Among those present for the 76th anniversary commemoration was Jurgen Haus, grandson of a German soldier, who expressed his “deep regret” for the actions of his Nazi forebears.

“I am here to break the silence… I love Israel, I cannot remain silent in the face of antisemitism,” he said in a speech.

Holocaust survivors Heinz Kounio and Achileas Koukovinos were honored during the commemorations.

Thessaloniki had a population of more than 50,000 Jews before World War II some 46,000 of whom were deported and killed at German Nazi death camps.

Before the deportations started the community in the city, which mainly comprised Sephardic Jews chased out of Spain in 1492, had developed to the point where it earned the nickname the “Jerusalem of the Balkans.”

But then came the horrors of 1943, when virtually all of the town’s Jews were deported, just four percent of them surviving the Nazi death camps to which they were dispatched

In recent years, Thessaloniki has held commemorations in mid-March instigated by mayor Yannis Boutaris to remember the first of the convoys of Jews rounded up and sent off to the camps from Thessaloniki’s railway station. Sunday’s turnout was the biggest yet.

Before that the fate of Greek Jews had become something of a taboo subject.

It was only in 2004 that teaching about the Shoah became compulsory in Greece and ten years later that a monument would be erected at the site of the former Jewish cemetery which the Germans razed and where the city university now stands.

Last year Israeli President Reuven Rivlin visited to lay the first stone of Thessaloniki’s 7,000 square metre (75,000 square feet) Holocaust Museum, financed by Germany and the Stavros Niarchos Foundation and which is due to open in 2020.

However, antisemitism showed its ugly face again in January when the Jewish Memorial Cemetery in Thessaloniki was vandalized two days before Holocaust Memorial Day.

The Jewish Memorial Cemetery was constructed on the site of an old Jewish Cemetery that was destroyed by the German Nazis forces occupying Greece during World War Two. CC