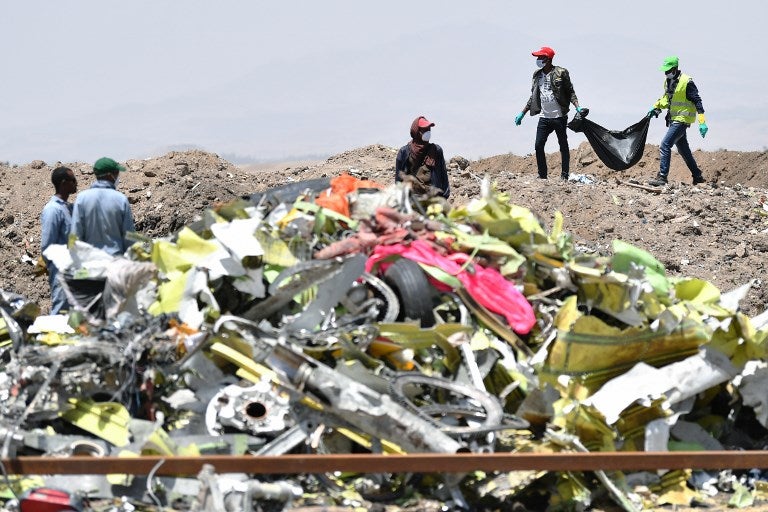 A crew working with an investigative team to clear the site after the Sunday crash of the Ethiopian Airlines operated Boeing 737 MAX aircraft, carry debris at Hama Quntushele village in the Oromia region, on March 13, 2019. AFP

While declining to give details, Dagmawit Moges told journalists the parallels would be the “subject of further study during the investigation,” with a preliminary report issued in “30 days”.

The announcement came a week after Ethiopian Airlines flight 302 plummeted into a field southeast of Addis Ababa minutes into its flight to Nairobi, killing all 157 people onboard.

The disaster caused the worldwide grounding of the Boeing 737 MAX 8 aircraft involved after aviation regulators noticed similarities with the October crash of an Indonesian Lion Air 737 MAX 8 that killed all 189 passengers and crew.

Both planes reportedly experienced erratic steep climbs and descents as well as fluctuating airspeeds before crashing shortly after takeoff.

Questions have honed in on an automated anti-stalling system introduced on the 737 MAX 8, designed to automatically point the nose of the plane downward if it is in danger of stalling.

The pilots of Lion Air Flight 610 struggled to control the aircraft as the automated MCAS system repeatedly pushed the plane’s nose down following takeoff, according to the flight data recorder.

In the case of the Ethiopian flight, the black boxes have been handed to France’s BEA air safety agency, which is working with American and Ethiopian investigators to determine what went wrong.

While the cause remains to be determined, Boeing’s CEO Dennis Muilenburg on Sunday said the manufacturer is “finalizing its development of a previously-announced software update and pilot training revision” to address behavior of the MCAS “in response to erroneous sensor inputs.”

Experts have questioned the US aviation safety certification process after learning that American pilots had lodged serious complaints about MCAS.

On Sunday the regulator, the Federal Aviation Administration, said it followed “standard” procedures, which “have consistently produced safe aircraft designs,”  in certifying the 737 MAX.

The disaster in Ethiopia left families in 35 nations bereaved.

On Sunday, Ethiopians gathered at Holy Trinity Cathedral in the capital Addis Ababa to bury 17 of their citizens killed in the crash, including the eight-person flight crew.

Relatives of the deceased sobbed and held portraits of their loved ones as an Ethiopian Orthodox priest said the last rites.

Wearing a t-shirt bearing a photo of Amma Tesfamariam in her flight attendant uniform, Meselech Petros said her 28-year-old sister was not supposed to work last Sunday, but came in to cover for a friend.

“What I can’t forget is that she left an eight-month-old child and didn’t come back,” Meselech said.

The funeral ceremony began when caskets draped in the Ethiopian flag were brought to the cathedral in a convoy of black hearses accompanied by hundreds of mourners.

It was unclear what the coffins contained.

Witnesses said the plane had nose-dived into the field, with the force of the impact leaving few bodies intact.

On Thursday, as grieving families and friends visited the area where the plane went down, an AFP correspondent saw them being handed plastic water bottles filled with earth from the site.

Ethiopia’s government has said it may take up to six months to identify the remains.

“What makes us very sad is we didn’t find any of her remains,” said Teshome Legesse, whose 24-year-old niece Ayantu Girma was a flight attendant on the plane.

‘Grief belongs to everyone’

Ethiopian Airlines is Africa’s largest carrier and in many ways the international face of the nation.

The deaths have shocked Africa’s second-most populous country, and the funeral attracted a wide range of mourners.

“We all are children of Adam and Eve, even though our skin colors are different,” said Seyoum Kidanu, a retired police officer wearing full dress uniform and a sash in the colors of the Ethiopian flag.

“When one person dies in this world, the grief belongs to everybody.” /cbb