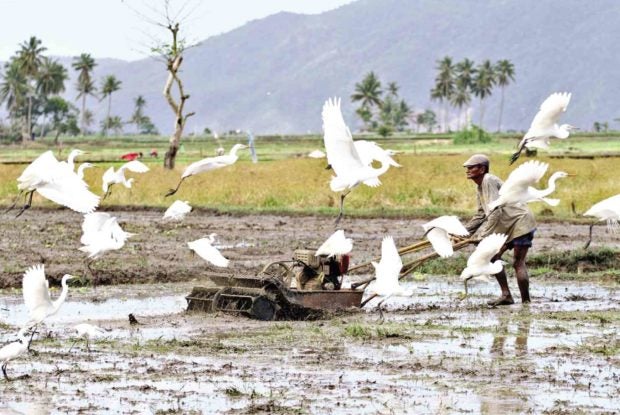 NO WORRIES YET A farmer guides his hand tractor as egrets feast on worms, insects and small frogs on a muddy rice field near Lake Mainit in Kitcharao town, Agusan del Norte province, on March 16. ERWIN MASCARIÑAS

BUTUAN CITY — While many areas in the country are now reeling from the effects of El Niño, there’s one region where the dry spell was not causing worries for agriculture officials, yet.

The Department of Agriculture (DA) in Caraga said there was no cause for alarm as weather forecasts don’t show the region to be among the areas which El Niño would hit hard.

Marisa Garces, senior agriculturist of the regional DA office, said projections by the Philippine Atmospheric, Geophysical and Astronomical Services Administration (Pagasa) showed that the five provinces in the region would continue to have “near normal” rainfall between March and April, which was “not alarming.”

“The color that we have on our chart right now is yellow meaning below normal, to green which is near normal rainfall,” Garces said.

“This should not be a cause for alarm for now,” she added.

She added, though, that the DA was “slowly receiving reports” about towns and cities being hit by the dry spell in the provinces of Agusan del Norte, Agusan del Sur and Dinagat Islands.

Data from Pagasa at the DA regional office suggested near normal rainfall for the entire month of March in Caraga.

The Pagasa data, however, also showed a shift to below normal rainfall volume by May in the provinces of Agusan del Norte (79.6 mm), Surigao del Sur (77.2 mm) and Surigao del Norte (70.9 mm).

Emmylou Presilda, DA Caraga information officer, said the department was not letting its guard down, however.

She said the regional DA office was ready to help farmers should El Niño have a disastrous effect on Caraga.

The regional agriculture office was also prepared to distribute at least 785 kilograms of vegetable seeds, she said.

According to Presilda, the DA Caraga was also ready to distribute medicines for livestock which would be hit by the dry spell.

“Replacement animals are also on hand,” she added.

In 2016, the region suffered an estimated loss of more than P546 million as a result of El Niño.

At least 14,426 farmers were given aid that year in 41 towns and the cities of Bayugan and Butuan.

In the province of Maguindanao, El Niño had already caused at least P130 million in damage to rice and corn farms, according to the provincial agriculture office.

Gabiel said his office had already recommended cloud seeding to the Bangsamoro Autonomous Region in Muslim Mindanao. —With a report from Edwin Fernandez