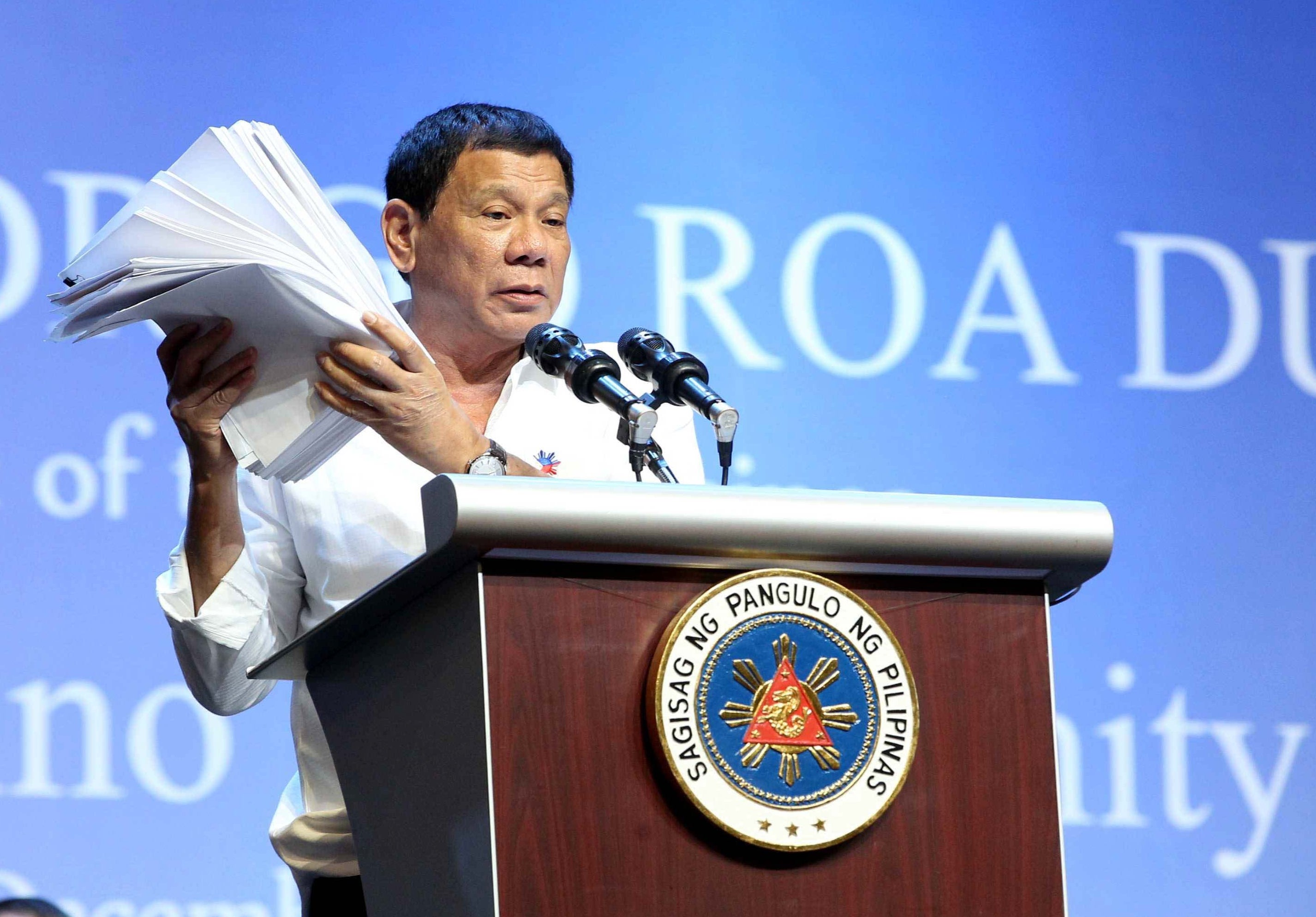 DIGONG LIST President Duterte shows off on Dec. 16, 2016, a thick compilation of what he said were lists of names of government and police officials involved in drugs.—MALACAÑANG PHOTO

Malacañang on Saturday dismissed as “pure nonsense” claims that President Rodrigo  Duterte may have committed an impeachable offense by releasing a so-called narcolist of 46 politicians with only 58 days to the May 13 elections.

“It has no legal and factual basis. In other words, it’s pure nonsense,” presidential spokesperson and chief legal counsel Salvador Panelo said.

Panelo scoffed particularly at Akbayan Rep. Tomasito Villarin for delving into “an issue of unfamiliar terrain to a nonlawyer like him.”

For the “legal education” of Villarin and other critics, Panelo stressed that politicians in the narcolist had already been charged at the Ombdusman.

“The release of their names is nothing more than a release of the names of criminal suspects. Such act cannot be considered a legal transgression, and even [less] so, an impeachable offense,” Panelo said.

Besides, Panelo said, due process would provide the narcopoliticians the opportunity to clear their names.

Sen. Aquilino Pimentel III agreed and said politicians on the list should really clear their names because the public has long been talking about their suspected drug connections.

The list included 10 members of the Partido Demokratiko Pilipino-Lakas ng Bayan (PDP-Laban), the party under which Mr. Duterte was elected President, and eight of them are running in the May elections, said Pimentel, who is also PDP-Laban president.

But for Communist Party of the Philippines  founder Jose Maria Sison, the list released by the President was incomplete.

Sison, in an e-mail from Utrecht, said the list did not name big-time drug lords like Peter Lim, a cosponsor of Mr. Duterte at a wedding.

Sison said the communist movement would punish government officials, politicians and individuals proven to be involved in drug trafficking.

“It is a policy of the people’s democratic government and New People’s Army (NPA) to capture, try and punish drug lords and their cohorts,” Sison said.

But he said “drug lords are harder to catch and are heavily protected so the NPA rarely has the chance to capture them.”

“The guards of drug lords are not just private armies but also policemen,” Sison added.