MANILA, Philippines — Water concessionaires continue to rake in high profits amounting to billions of pesos despite being inefficient in assuring stable water supply to their consumers, a water advocacy group said on Saturday.

“Corporate management of water services has been efficient in producing profits but inefficient in ensuring cheap, safe and secure water services to millions of consumers,” the group Water for the People Network (WPN) said, as quoted by the research organization Ibon Foundation.

The group recalled the hype to justify water privatization during the time of former President Fidel Ramos where residents were promised “that the private profit-seeking East and West Zone concessionaires would provide cheap, safe and secure water services.”

However, WPN said “the concessionaires have used their monopoly power to overcharge customers and make these excessive profits.”

Since water privatization began in 1997, the group noted the water rates have risen by 879% for Manila Water customers and 574% for Maynilad customers. 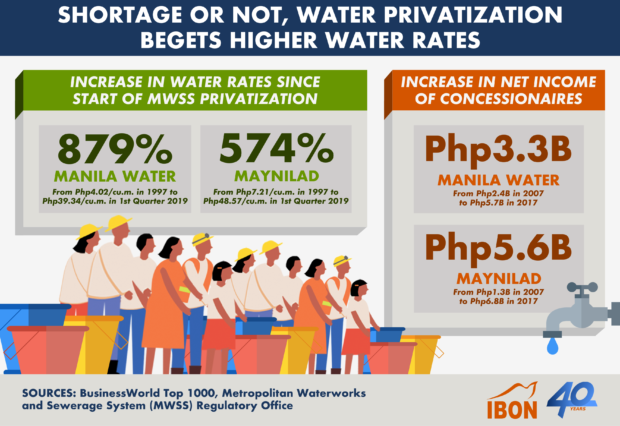 “Such large profits amid looming months of erratic water supply for so many consumers is grossly unacceptable,” WPN said.

Furthermore, the group said the government is also accountable for allowing water privatization and for the “insufficient regulatory powers of the Metropolitan Waterworks and Sewerage System (MWSS).”

It noted how the MWSS-Regulatory Office (MWSS-RO) is “overly dependent on monitoring reports and other information coming from the water concessionaires.”

Manila Water’s customers in some parts of Metro Manila and Rizal have been experiencing water service interruptions for the past week, which lasts from six to 21 hours. /jpv

Manila Water: Shortage may be over before summer’s end