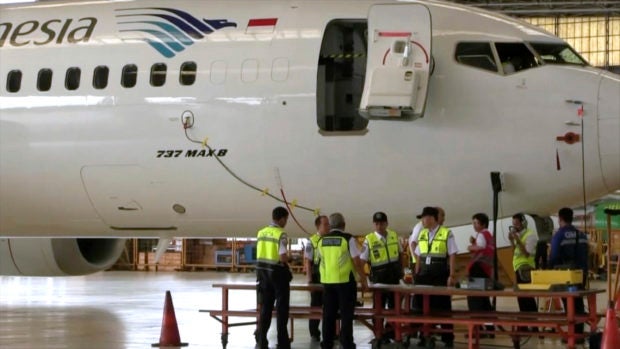 In this image from video taken on March 12, 2019, a Boeing 737 Max 8 aircraft is in hangar before the inspection at Garuda Maintenance Facility at Soekarno Hatta airport, Jakarta. AP

HEJERE, Ethiopia  —  Japan is following other countries on multiple continents in banning the Boeing 737 Max 8 and 9 aircraft from its airspace following an Ethiopian Airlines’ crash on Sunday that killed all 157 people on board.

The decision Thursday comes a day after the US, where Boeing is based, issued an emergency order grounding the 737 Max 8.

Japan’s transport ministry said its decision is due to the U.S. Federal Aviation Administration’s announcement Wednesday that new satellite data showed similarities to an earlier crash of an Indonesian Lion Air flight accident in October.

Japanese airlines do not use the aircraft. /ee