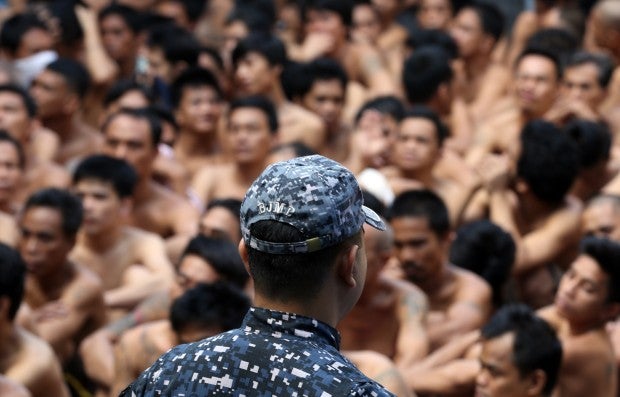 File photo of a jail facility in Quezon City under the supervision of the Bureau of Jail Management and Penology. INQUIRER PHOTO / NINO JESUS ORBETA

MANILA, Philippines — The percentage of congestion in jail facilities in the country for early 2019 is at 441.74 percent, data from the Bureau of Jail Management and Penology (BJMP) disclosed on Thursday.

As of March 12, the BJMP accommodates 136,881 Persons Deprived of Liberty (PDL), even as the 476 jail facilities managed by the bureau nationwide can only cater to almost 30,000 PDLs, the data showed.

Of the total number of inmates, about 96,620 or 70.65 percent of the total population in jail facilities face cases related to illegal drugs.

Meanwhile, of all jail facilities, the Navotas City Jail is the most congested, followed by the Malolos City Jail in Bulacan, and the San Jose Del Monte City Jail, said Chief Inspector Xavier Solda, spokesperson of the BJMP.

Solda said that the increased congestion percentage in jails from 2016 to 2018 was due to intensified anti-crime operations of law-enforcement agencies, particularly against illegal drugs.

(But of course, we partnered it with some interventions, like in the Supreme Court, the additional drug courts, fast-tracking of cases, and the jails where they will be brought.)

He said that additional funds from the government for additional facilities of the BJMP in recent years also helped decongest jail cells. /jpv