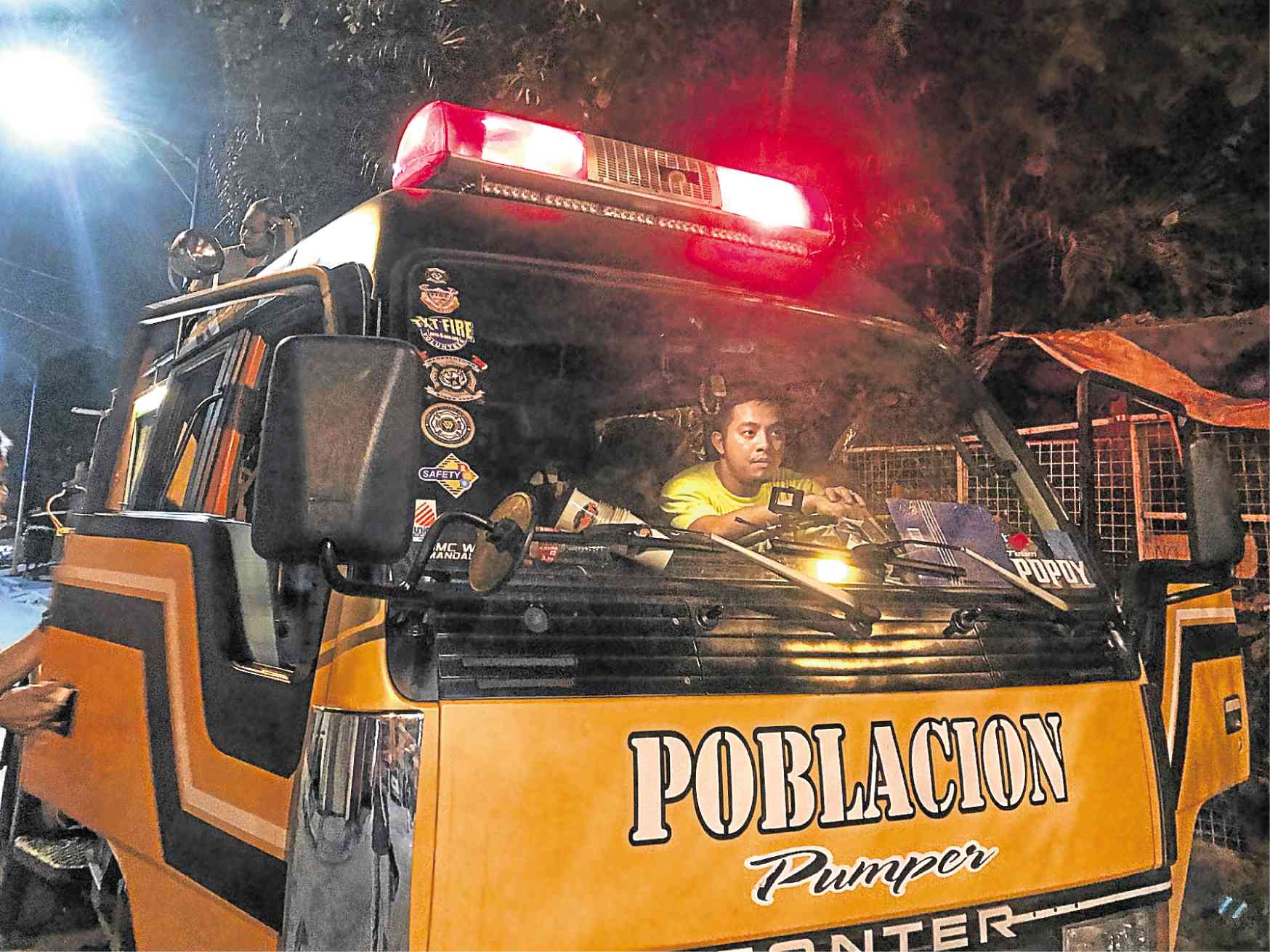 SLEEPLESS IN MANDALUYONG Ryan Moreno prepares for another sleep-deprived night as he and other volunteer firefighters get ready to deliver water to Mandaluyong City residents hit hard by the shortage. —Krixia Subingsubing

Ryan Moreno, a 29-year-old volunteer fireman, has not had a good night’s sleep for a week.

“We’ve been living on three-, four-hour naps lately,” he said, only to be interrupted by a voice on his walkie-talkie asking if a fire truck could be sent to Barangay Wack Wack whose water reserves were running low.

With no end in sight to the worsening crisis, affected Mandaluyong residents have come to depend on the city’s volunteer firefighters like Moreno. His brigade, the Poblacion Firefighter Volunteer Team, has been filling the drums and pails lined up on the streets for the past seven days.

“As long as we’re out and about,” said Poblacion brigade chief Pedro Canlas Jr., “they can survive another day.”

The fire volunteers have been silently bearing the brunt of the crisis, working 10-hour shifts without compensation. They rarely get to drink water themselves, subsisting instead on soda or juice given by grateful people.

On top of this, they’re often met with furious residents who accuse them of preferential treatment.

“See what we have to deal with?” said Canlas, moments after being upbraided by an elderly woman who accused his team of not doing enough. “This is just half the battle.”

The eight-man team based in Barangay Poblacion live in different parts of Metro Manila.

Only Canlas is a full-time firefighter; the rest have day jobs and come and go as they please.

Before the water crisis, their team helped put out fires at least six times a month. They received a P1,000 monthly allowance from the barangay.

But when the waters at Manila Water’s reservoir, La Mesa Dam, dipped to critical level over the past days, the volunteer group had no inkling of how swiftly things would deteriorate.

Residents mostly grumbled at first. “They were confused,” Moreno said. “The water shortage was so sudden, and we were just asking when the water would come back.”

When it became clear that the lack of water would last longer than anticipated, tempers started flaring and the nightly water refills became a  free-for-all, especially in poor, high-density villages like Barangays Hulo and Barangka Drive.

“Everyone’s on survival mode,” Canlas said. “And we’re caught in between.”

Their shift starts at 7 p.m. with the first stop at Barangka Drive whose residents have suffered the most. Their last trip would be 8 a.m. the next day, leaving them with barely enough time to get ready for their day jobs.

Often they would pass by streets where people standing with empty pails and drums would desperately wave for them to stop.

“Look at that, it’s so pitiful,” Canlas said. “But we can’t stop for everyone who asks for help. Otherwise, the water is not going to get where it is most needed.”

Even as they arrive at the barangay where they were assigned to deliver water, the team is still met by furious residents. “What took you so long?” one of the women screamed at them. “It’s been a day since trucks passed here!”

To refill the containers for a single street, the 500-gallon firetruck has to make five round trips to the nearest fire hydrant—often in the next village.

No rest for the weary

A single trip takes at least 30 minutes. There is barely time to eat or drink.

“It’s so exhausting,” said 19-year-old Dana delos Reyes, another volunteer who is two months pregnant. “And so thankless. But you know how it is. Para sa bayan (For the country).”

Asked whether barangay or city government officials promised them extra pay for their hard work in the past week, Moreno said: “No. That’s why it’s volunteer work.”

As the fire truck passed by Barangay Addition Hills—a community of a million poor households hidden behind rainbow-painted concrete walls, Canlas made an observation.

“Thank God there’s water there,” he said “Once the shortage hits that village, it’s going to be an apocalypse. It’s over for all of us.”