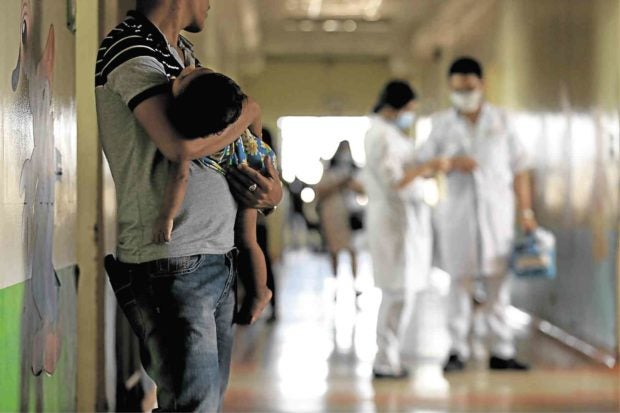 QUICK-SPREADING VIRUS A father waits for his measles-stricken child to be admitted to the pediatric ward of San Lazaro Hospital in Sta. Cruz, Manila. The Department of Health has declared a measles outbreak in Metro Manila and in four other regions. INQUIRER file photo / RICHARD A. REYES

MANILA, Philippines — The number of people who have died after reportedly contracting measles have reached 286 in two months, the Department of Health (DOH) said.

In a latest report of the DOH’s Epidemiology Bureau dated March 8, a total of 18,553 measles cases and 286 fatalities were recorded from January 1 to March 7.

Meanwhile, 80 percent or 228 of those who have died did not have any history of vaccination, 28 have unknown vaccination status, and 30 had at least one dose of vaccination.

Metro Manila recorded the highest number of deaths at 82, followed by Calabarzon with 80 deaths, the DOH said.

Meanwhile, the highest number of measles cases were recorded at Calabarzon with 4,087 cases, followed by Metro Manila at 3,850. /jpv