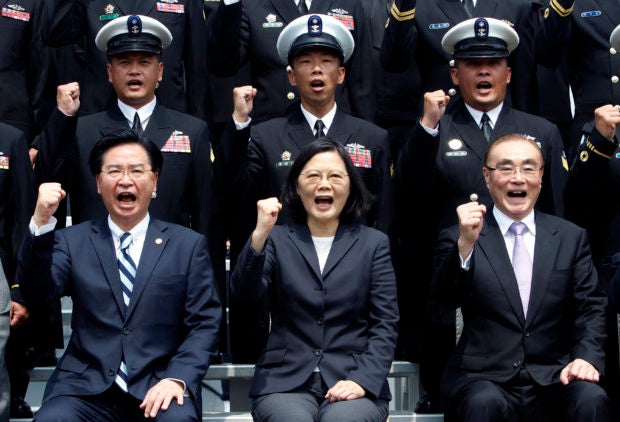 FILE – In this March 21, 2017, file photo, Taiwan’s President Tsai Ing-wen, center, along with Defense Minister Feng Shih-kuan, right, and Secretary-General of National Security Council Joseph Wu, left, cheer with navy officers during a visit to Zuoying Naval base in Kaohsiung, southern Taiwan. China says attempts by Taiwan’s government to block its goal of bringing the self-governing island under Beijing’s control are like “stretching out an arm to block a car.” The new rhetorical broadside was launched late Tuesday, March 12, 2019 against Taiwanese President Tsai following her announcement of guidelines to counter China’s “one country, two systems” framework for political unification with the island. (AP Photo/Chiang Ying-ying, File)

BEIJING – Attempts to block Beijing’s goal of bringing Taiwan under its control are like “stretching out an arm to block a car,” China said in its latest rhetorical broadside against the self-governing island republic’s independence-minded president.

Spokesman for the Chinese Cabinet’s Taiwan Affairs Office An Fengshan accused Tsai of harming relations between the sides and using the welfare of the Taiwanese people as a “poker chip” for the sake of electoral gains.

Such actions “stand in opposition to the interests and welfare of our Taiwan compatriots, and endeavor to block progress by compatriots on both sides to progress,” An said. “All it is, is stretching out an arm to block a car,” he said, using a common Chinese expression to describe a futile action.

China says Taiwan is a part of its territory that must be brought under its control by force if necessary, despite the social, political and economic differences developed between them since they separated amid civil war 70 years ago.

Tsai of the pro-independence Democratic Progressive Party was elected in a 2016 landslide, but has seen her approval ratings fall as she prepares to seek re-election next year.

In a meeting on national security Monday, Tsai said relations with China must be “viewed in a positive way, but only when the principle of equal dignity is safeguarded,” according to the official Central News Agency.

Taiwan’s legal and political institutions need strengthening and its military needs bolstering — including through bigger budgets — while economic competitiveness needs to be raised and greater outreach make to the international community to counter Beijing’s isolation campaign, she said.

“As long as we stay united, national sovereignty, freedom and democracy will not be eroded, and ‘one country, two systems’ will not become the future of Taiwan,” Tsai said.

China cut off contacts with Tsai’s government shortly after her election and has deployed a carrot-and-stick strategy to undercut her support among the island’s voters.

That includes inducements for Taiwanese to live and work in China by offering them local legal status, appealing especially to young creatives and technology workers frustrated by Taiwan’s small market and stagnant wages.

It has backed that up with a drive to poach away Taiwan’s dwindling number of diplomatic allies, leaving it with just 17, blocking its participation in international gatherings and stepping-up its saber rattling through wargames and threatening statements from leading military figures. /

Those include president and ruling Communist Party Xi, who commands the armed forces, and in a January address renewed the threat of military action against the island. He received further endorsement from members of the Beijing-appointed Taiwan delegation to this month’s annual meeting of China’s ceremonial legislature, none of  whom come from Taiwan or have any more than tenuous connections to the island.

China’s strategy and impatience with Tsai’s administration among Taiwanese voters seems to be having an effect. The DPP took a beating in November’s local elections, and public opinion surveys put her approval rating at around 25 percent.

While Taiwanese increasingly favor closer economic ties and exchanges with Taiwan, the island’s 23 million residents as a whole remain overwhelmingly opposed to political unification with China.

Although the U.S. cut diplomatic ties with Taiwan in favor of China 40 years ago, it remains a strong Taiwanese ally and is legally committed to consider threats to the island a matter of deep concern.

Support for Taiwan has remained strong under President Donald Trump and the island’s request for new warplanes and other armaments have been seen as receiving a friendly reception in Washington, which is at loggerheads with Beijing over trade and other issues. / gsg

Read Next
Plan to put up sports auditorium in Quezon Memorial Circle opposed
EDITORS' PICK
Cherry Mobile teams up with Cloud Panda PH, launches online store
WHO resumes hydroxychloroquine coronavirus trials
COOCAA TV Bounce Back Sale offers up to 50% off
DOLE eyeing P20-B subsidy for MSMEs
Over P785M distributed to 98K PUV drivers in Metro Manila — DSWD
SMDC The Good Guys on the Go
MOST READ
Philippines’ youngest survivor of COVID-19 dies
It’s final: Anti-Terror Bill now only needs Duterte’s signature
Piolo gets first call slip from ABS-CBN to resume ‘ASAP’ taping
‘She had no right to be in Singapore’: Youth pleads guilty to abusing Filipino maid
Don't miss out on the latest news and information.