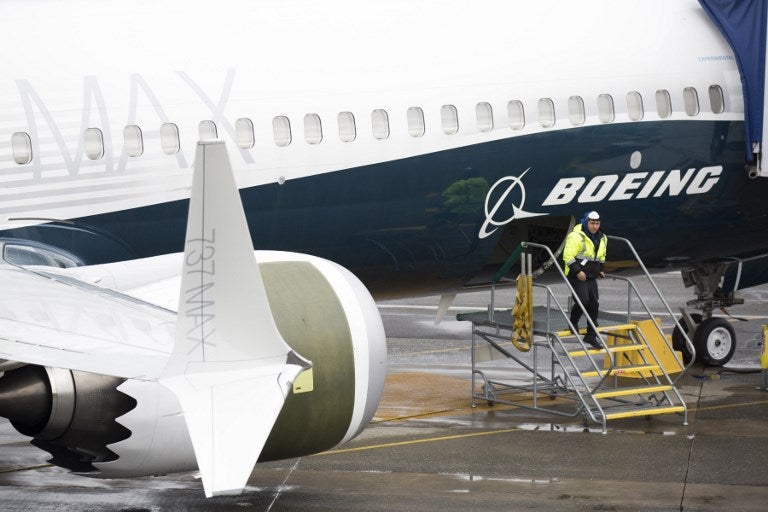 A worker is pictured next to a Boeing 737 MAX 9 airplane on the tarmac at the Boeing Renton Factory in Renton, Washington on March 12, 2019. – The US said there is “no basis” to ground Boeing 737 MAX airplanes, after a second deadly crash involving the model in less than five months prompted governments worldwide to ban the aircraft. “Thus far, our review shows no systemic performance issues and provides no basis to order grounding the aircraft,” Federal Aviation Administration (FAA) chief Daniel Elwell said in a statement. (Photo by Jason Redmond / AFP)

JAKARTA — Boeing is insisting that its 737 Max planes are safe, despite the increasing number of countries that are prohibiting them from flying, following an Ethiopian Airlines crash in Addis Ababa, Ethiopia on Sunday.

Among the countries that have grounded the aircraft are Australia, France, Germany, China, South Korea, Indonesia and Singapore.

“Safety is Boeing’s number one priority and we have full confidence in the safety of the 737 Max,” said Boeing in a statement issued on boeing.mediaroom.com on Tuesday.

The company said it understood the decisions made by the transportation authorities of several countries and airlines to ground the planes, saying they know they are acting in the interests of their home markets.

“We’ll continue to engage with them to ensure they have the information needed to have confidence in operating their fleets,” the statement says.

Boeing also noted that the United States Federal Aviation Administration was not mandating any further action. It said that based on the available information, the company did not have any basis to issue new guidance to operators.

Sunday’s crash of Ethiopian Airlines flight ET302 that killed all the people on board, was the second accident involving the aircraft recently. Five months ago on Oct. 28, 2018, Lion Air flight JT 610 crashed into the Java Sea.