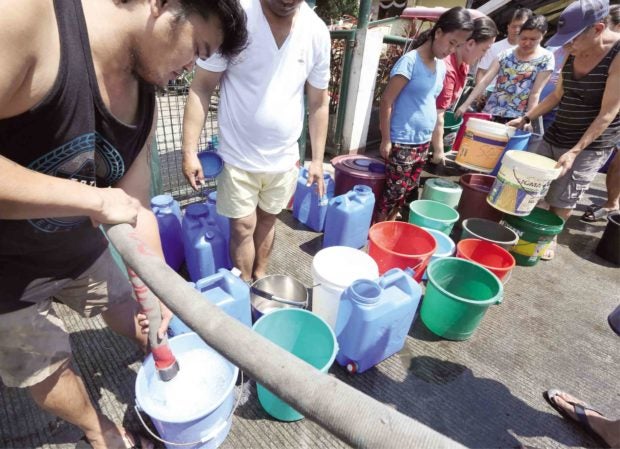 WATER IS LIFE.  Residents of Barangka Drive in Mandaluyong City fill their containers with water from a fire truck amid a water shortage gripping the city and other parts of Metro Manila and Rizal province. —MARIANNE BERMUDEZ

In a phone interview with INQUIRER.net on Wednesday, Jimmy Isidro of the Mandaluyong Public Information Office said that Manila Water informed the city government that the situation would only normalize by August.

Mayor Abalos, along with other city officials met with Manila Water personnel last Monday to discuss measures that would be taken after the city suffered a water supply shortage.

(They said it would normalize by August when it starts raining.)

(That is why we are praying for rain.  We hope it rains.  We hope a storm comes.)

Over the weekend, the water elevation of the La Mesa Dam breached its critical level of 69 meters, dropping to 68.93 meters.

Residents of Metro Manila and parts of Rizal have been affected by water supply interruptions since March 7.

According to Isidro, 12 of Mandaluyong’s 27 barangays have experienced low to zero water supply while the rest are affected by low water supply.

He added that Mayor Abalos has urged car wash establishments to refrain from using excessive water and reminded residents to save up on water.

Other than Mandaluyong City, Manila Water also supplies water to consumers in the Pateros and the cities of Makati, Pasig, San Juan, Taguig, Marikina, most parts of Quezon City, San Andres and Santa Ana in Manila as well as in the municipalities and/or cities of Angono, Antipolo, Baras, Binangonan, Cainta, Cardona, Jalajala, Morong, Pililia, Rodriguez, San Mateo, Tanay, Taytay and Teresa in Rizal.

The east zone concessionaire has earlier said it will issue a new advisory announcing a new schedule of water supply interruptions.

READ: Manila Water: No water in some areas for 20 hours

(They said that they would release a new schedule, we hope that the schedules are correct.  Our situation is very tough.)

(Their Facebook announcement said 9m to 11 a.m., but it did not happen. Five of our barangays have zero water.) / gsg