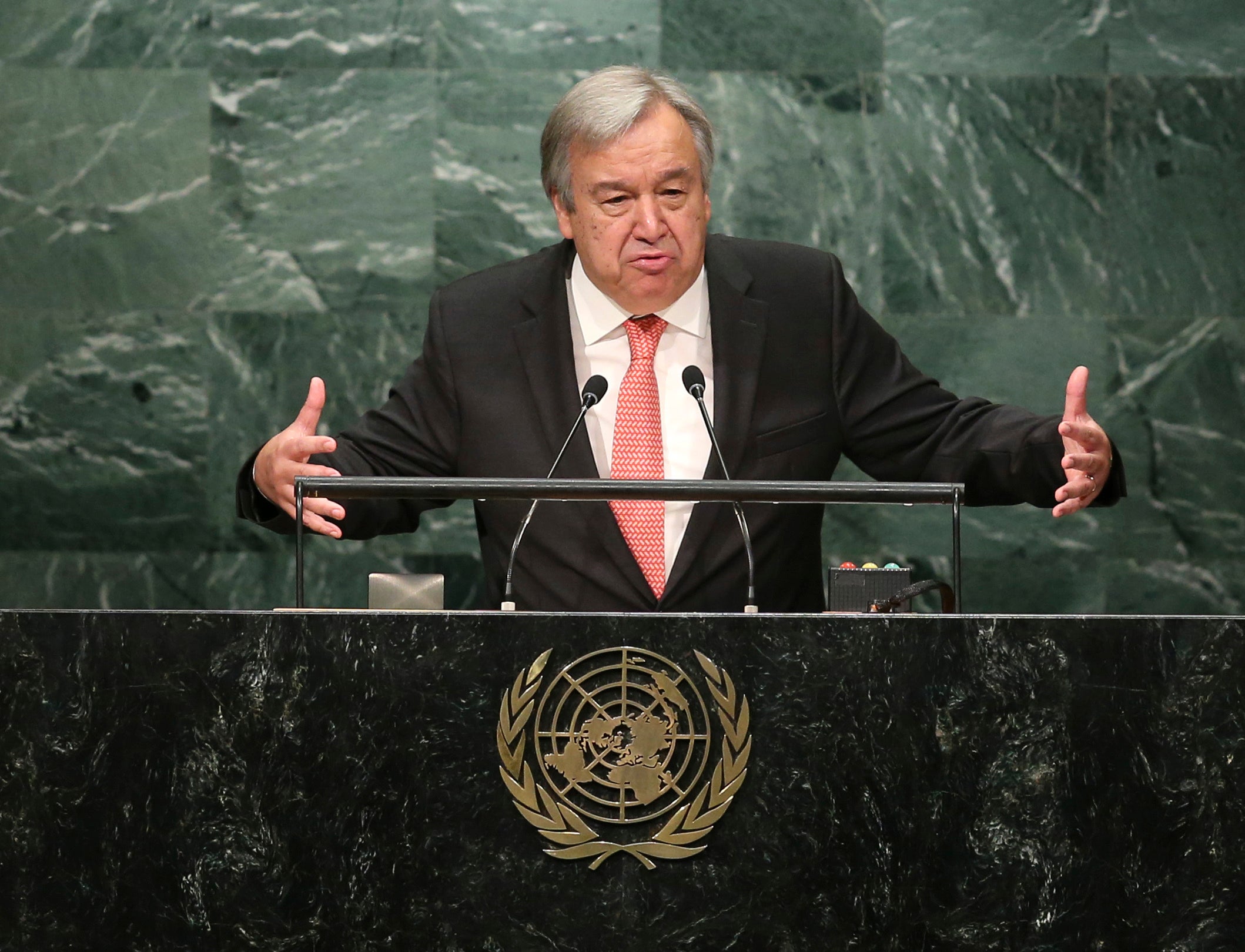 In this Oct. 13, 2016 file photo, Antonio Guterres of Portugal, Secretary-General designate of the United Nations, speaks during his appointment at U.N. headquarters. Guterres begins a five year term as the organization’s Secretary General on Sunday, Jan. 1, 2017. Guterres takes the reins of the United Nations on New Year’s Day, promising to be a “bridge-builder” but facing an antagonistic incoming U.S. administration led by Donald Trump who thinks the world body’s 193 member states do nothing except talk and have a good time. AP FILE PHOTO

United Nations, United States — UN Secretary-General Antonio Guterres heads to Washington on Wednesday for talks on the UN peacekeeping budget after the United States drilled a hole in the world body’s finances by capping its share.

The US, which is the number one financial contributor to the UN, said in December that it would cover no more than 25 percent of the UN’s multi-billion-dollar peacekeeping budget, down from 28.47 percent.

Guterres will be meeting US Secretary of State Mike Pompeo and National Security Advisor John Bolton for talks that are also expected to touch on Yemen and Venezuela.

On Thursday, the UN chief heads to Congress for meetings on the budget, hoping to make allies in his campaign to keep the world’s peacekeeping operations afloat.

The US cost-cutting has created a hole of about $220 million in this year’s $6.7 billion budget, but the shortfall has been compounded by arrears that have pushed peacekeeping finances further into the red.

In January, unpaid contributions to the peacekeeping budget totaled nearly $2 billion, with the United States failing to pay a large chunk of that amount.

To make up for the revenue loss, the United Nations has withheld payments to countries that contribute troops including Ethiopia, India and Pakistan — which are each owed hefty amounts.

At the end of January, Ethiopia was owed $41.6 million for its blue helmets, India $40.5 million and Pakistan $35.7 million, according to the UN peacekeeping department.

Peacekeeping financing is determined by a complicated formula that takes into account a country’s wealth, whether or not it is a permanent Security Council member and other factors.

The permanent Council members, which have veto power, generally pay more than others.

Washington has been trying to convince several countries to reduce the special discounts allocated to them under this formula in order to cover the $220 million annually which it no longer wants to pay.

It has knocked on the doors of Saudi Arabia, Qatar, the United Arab Emirates, Turkey, Singapore, Brunei, Brazil, Mexico and India, but to no avail.

Guterres is hoping to discuss other ways to address the budget shortfall such as allowing transfers of funds from one peace mission to another, an idea opposed by some countries which insist their funding should go to specific operations, diplomats said.

Another proposal would be to create a fund with revenue left over from a mission’s budget instead of reimbursing member-states as is currently the case.

UN diplomats argue that blue helmet operations are in Washington’s interest and that the cost of US military engagement in many trouble spots would be much higher without the UN.

To cave in to US demands and “give more would be to tell them they’re right,” said a UN diplomat, who asked not to be named.

More than 100,000 peacekeepers are deployed in 14 missions worldwide including major operations in the Democratic Republic of Congo, Mali, and South Sudan that cost more than $1 billion annually to run. /kga