AFP: Suspect in Iloilo student’s slay no longer with ROTC 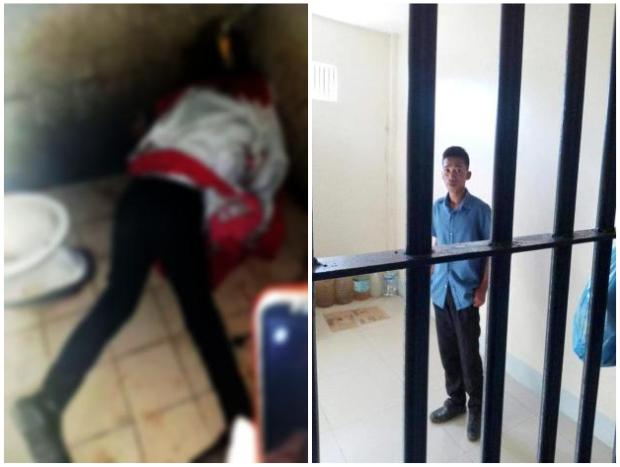 A security guard found the body of Willy Amihoy slumped in the toilet of the dormitory of the Iloilo State College of Fisheries Dumangas Campus on Monday, March 11, 2019. A schoolmate, Elmer Decilao (right), was jailed for the killing. (Photo by JOEL FRANCO / Inquirer Visayas)

MANILA, Philippines — The Armed Forces of the Philippines (AFP) said on Tuesday that the death of a student in Iloilo should not be associated with Reserve Officers’ Training Corps (ROTC) program.

Brig. Gen. Edgard Arevalo, AFP spokesperson, told reporters that the suspect was no longer an ROTC commander at the time of the incident, contrary to earlier news reports.

Willy Amihoy, a student of Iloilo State University, was found dead inside the toilet of the boys’ dormitory of Iloilo State College of Fisheries Dumangas Campus on Monday.

The suspect is Elmer Decilao, first reported as an ROTC corps commander of the same school.

“This is entirely erroneous…The suspect used to be a corps commander of ROTC, but he’s no longer one. He is no longer enrolled with the ROTC. He’s a graduating student while the victim is a freshman,” Arevalo said.

Based on the information they have received, the spokesperson said the victim and the suspect are roommates in the dormitory.

Decilao was reportedly angry at the Amihoy, who had accused him of stealing his wallet.

The suspect struck Amihoy’s head with a metal pipe several times and brought his body to the toilet.

The military’s statements came after the Commission on Human Rights (CHR) condemned the incident.

“It is unfortunate that both [students] were under a national program meant to develop physical, moral, spiritual, intellectual, and social well-being,” the CHR said.

The League of Filipino Students also criticized the incident, saying it was not an isolated case.

“Physical abuses, violence, harassment, and other forms of rights violations have long been institutionalized by generating more and more AFP pawns in schools,” the LFS said on Facebook.

But Arevalo insisted that it should not be connected in any way to the ROTC program.

“This has no relation to ROTC. So those spreading false information condemning the ROTC program, please stop it. This is a clear lie,” Arevalo said.

“We believe that ROTC is advantageous to the youth. It will give them a sense of responsibility, discipline and love for country,” he added. /atm