IS releases defiant video from last scrap in east Syria 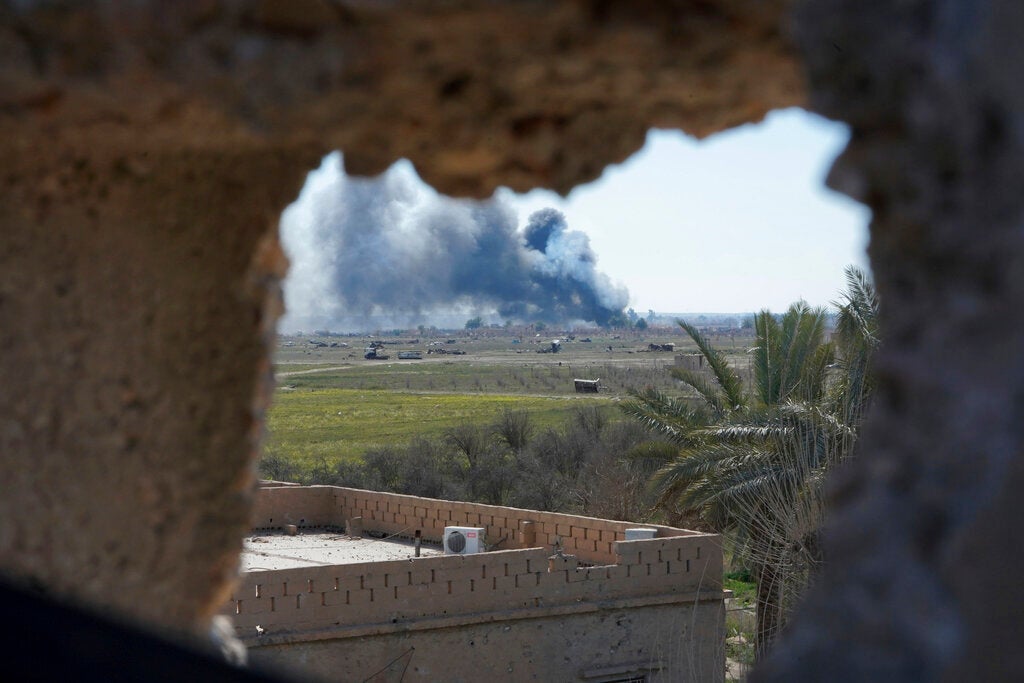 Beirut, Lebanon – The Islamic State (IS) group has released a video allegedly showing jihadists in the last scrap of territory they control in eastern Syria, quietly defiant in the face of advancing US-backed forces.

The jihadists are hunkering down in their final riverside bastion on the Iraqi border, a sprawl of vehicles and tattered tents on the banks of the Euphrates River.

“If we had thousands of kilometers and now we only have some kilometers left, it is said we have lost – but God’s judging standard is different,” said a man named Abu Abdel Adheem, in the video published late Monday via IS social media channels.

“The battles are not over,” said the jihadist, his head covered with a white and red scarf, sitting on the ground in a circle with two men and a young boy in a hooded jacket.

His companions repeatedly lifted cutlery to their blurred out faces, spooning clear liquid from a saucepan behind them.

A figure draped in the all-covering black robes worn by women under the jihadists’ rule watched them briefly then slowly ambled off.

An explosion could be heard in the background.

Kurdish-led Syrian forces have been fighting to expel the jihadists from their last redoubt, backed by air strikes and troops from a US-led international coalition.

“What is our crime? We only wanted to implement the law of God,” said the man.

“Why have all the infidel countries of the world gathered to fight us? Why are we besieged and why are we being bombarded day and night?” he added.

After pausing to allow thousands of people, mostly IS family members, out of the besieged pocket, the Syrian Democratic Forces re-launched their offensive Sunday.

They said they were moving in as they had not observed any civilians inside, but a special unit was in charge of evacuating any non-combatants they encountered.

For two nights in a row, they have pounded the jihadist enclave with shelling and air strikes.

The IS video could not be immediately authenticated, but what is visible of the background is consistent with what AFP reporters have seen of the IS stronghold.

The video – dated by its publishers with an Islamic month that started on Friday – showed dozens of men and boys on the edges of a busy road.

By its side, blankets had been thrown over rudimentary frames to make makeshift tents amid a mass of canvas and vehicles, with palm trees jutting out in the distance.

Drone footage showed shelters, a few buildings, and a road filled with people.

Another man in the video named as Abu Abdel Aziz said pamphlets were falling on the redoubt.

“The disbelievers are throwing pamphlets at us and mocking us,” he said.

“They tell us, ‘You’re hungry while your amirs live in comfort and eat’,” he said, referring to IS leaders.

A fellow jihadist presented as Abu Abdel Rahman, wearing a black and white scarf over a white skull cap, asked what had warranted the fight against them.

“What is this so-called terrorism they are accusing us of?” the bespeckled man asked.

“Even in this narrow patch you find the law of God,” he added.

IS overran large parts of Syria and neighboring Iraq in 2014, declaring a “caliphate” and imposing their brutal interpretation of Islam on millions.

The jihadists have been accused of genocide and crimes against humanity, carrying out mass executions, taking women as sex slaves, and meting out bloody punishments against anyone who disobeyed their rule.

But they have since lost all their territory to various offensives in both Syria and Iraq, except for their last encampment in the eastern Syrian village of Baghouz. /kga