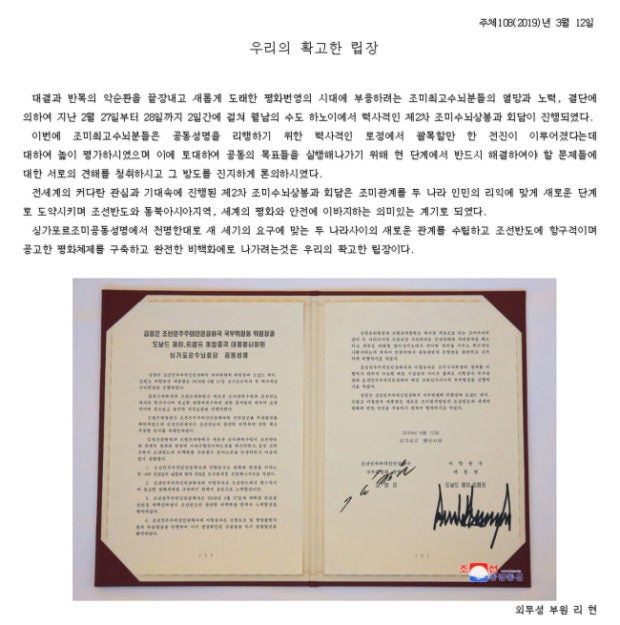 PHOTO from Yonhap via The Korea Herald/Asia News Network

A propaganda website called Uriminzokkiri said in an article on Tuesday that it is Pyongyang’s firm stance to establish new relations with Washington, build a lasting and solid “peace regime” on the Korean Peninsula, and move toward complete denuclearization. It did not mention that the summit fell apart without a deal.

It also said the North’s leader Kim Jong-il has decided to continue “productive dialogues” to resolve problems discussed in the summit with US President Donald Trump in Hanoi on Feb. 27-28.

On Monday, a weekly named Tongil Sinbo rated the summit highly, and mentioned that Kim and Trump promised to meet again as they bid farewell.

The North has frequently used such expressions ever since it began dialogue with the US last year, but it is the first time since the Hanoi summit they clarified their commitment to complete denuclearization.

In a March 1 report following the summit, the Korean Central News Agency said the two sides “agreed to keep in close touch with each other for the denuclearization” of the peninsula.

But the Korean Central TV did not mention denuclearization when it aired a 75-minute documentary film on Kim’s trip to Vietnam last week.

Tongil Sinbo said Monday that the dismantlement of its main nuclear facility in Yongbyon and the lifting of some sanctions is the most realistic and big step in denuclearization under the principle that the two countries build trust and take a phased approach.

The propaganda outlet urged US officials to not be swayed by “unreasonable and brazen” claims from political opposition, and take the path to “meet the expectations of humanity which wants world peace and security.”

It also said South Korea and the US must scrap all military drills, in regard to the new, weeklong combined defense exercise “Dong Maeng” that was to end Tuesday.