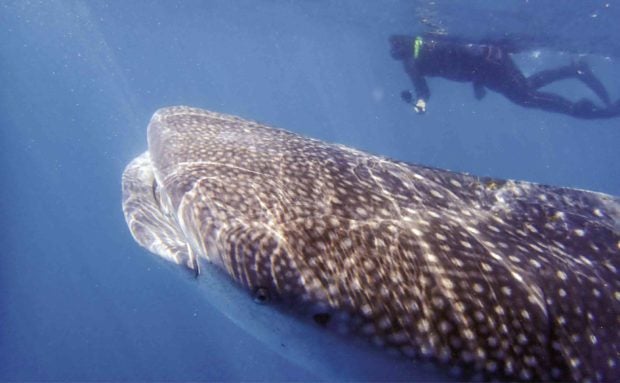 FEEDING TIME The abundance of food, particularly sardine, or “lupuy,” has drawn whale sharks to Sarangani Bay in Mindanao, according to a government task force. —PHOTO COURTESY OF DENR SARANGANI

Nilo Tamoria, Department of Environment and Natural Resources (DENR) regional director in Soccsksargen (South Cotabato, Cotabato, Sultan Kudarat, Sarangani and General Santos) said some of the butanding were recently seen feeding in the waters off Barangay Silway during the monitoring that started in late February.

The Task Force Butanding-GenSan said this made the Philippines the second country, after Mexico, with the most number of whale sharks, quoting a report from Wildbook for Whale Sharks, a global online library that provides a visual database of whale sharks encounters around the world.

“[We need to ensure] that these whale sharks should be protected while they are still in our area … There is a possibility that they will be harmed if we will not act soon,” Tamoria said in a statement.

He said the task force, composed of different government agencies, had tagged the whale sharks seen feeding on surface waters.

Butanding sighting had been recorded in Sarangani as early as 2006.

In 2014, the DENR documented two whale sharks off the waters of this city, the agency said.

According to the task force, the highly migratory whale sharks could have been drawn to Sarangani Bay due to the abundance of sardine, locally known as “lupuy.”

Roy Mejorada, ECPC chief, said the team had been conducting daily monitoring also to document the behavior of butanding.

“We want to understand why they are here so we can contribute to the scientific information on their biology,” he said.

Mejorada said data that the team would gather would also help local governments draft ordinances for the protection of whale sharks in the 211,913-hectare Sarangani Bay.

The Philippines, which has a whale shark population of at least 1,600, dislodged Australia as the country with the second largest known population of whale sharks in the world, according to a report this month of the Large Marine Vertebrates Research Institute. —REPORTS FROM BONG S. SARMIENTO AND EDWIN FERNANDEZ