Trump to seek another $8.6 billion for border wall 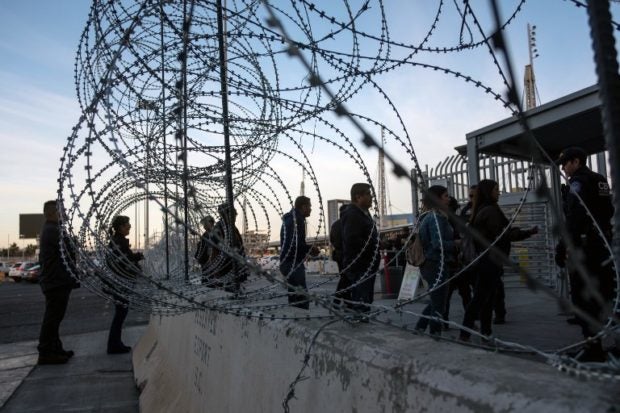 In this file photo taken on November 19, 2018 a Customs and Border Protection officer asks travelers for their visas as seen through barriers set by US authorities at San Ysidro port of Entry, at the US-Mexico border, in preparation for the arrival of a Central American migrants’ caravan moving towards the United States, as seen from Tijuana, Mexico (Photo by Guillermo Arias / AFP)

WASHINGTON — US President Donald Trump is seeking $8.6 billion in fresh funding for a wall on the US-Mexico border, likely triggering another fight with Congress.

The 2020 budget request, which is set to be formally unveiled Monday, would far exceed the $5.7 billion Trump demanded last year.

That previous request led to an impasse that resulted in a 35-day partial shutdown of the US government, the longest ever.

Democratic congressional leaders Nancy Pelosi and Chuck Schumer decried the move, warning Trump that another legislative defeat would await him.

“I suppose there will be,” he told Fox News Sunday.

Separately, Kudlow expressed optimism that US economic growth will surpass three percent “in 2019 and beyond.”

The White House Office of Management and Budget said the president’s budget request seeks $2.7 trillion in cuts — “higher than any other administration in history.”

A statement by Acting Director Russ Vought said the cuts would be achieved through a five percent reduction in non-defense spending below the 2019 level, while more funds are being requested for areas like border security, defense, combating opioids and veterans care.

In a joint statement, Pelosi and Schumer charged that Trump “hurt millions of Americans and caused widespread chaos when he recklessly shut down the government to try to get his expensive and ineffective wall.”

“Congress refused to fund his wall and he was forced to admit defeat and reopen the government. The same thing will repeat itself if he tries this again. We hope he learned his lesson,” they said.

That would be on top of the $6.7 billion in wall funding that Trump has ordered redirected from other government programs under a national emergency he declared last month.

He declared the emergency after Congress approved only $1.375 billion for construction of 55 miles (90 kilometers) of barriers along the border in Texas.

The emergency declaration was roundly criticized by Democrats, joined by a handful of Republicans, who said it represented a possibly unconstitutional overreach of presidential authority.

Some Republicans expressed fear that Trump could be setting a precedent that a future Democratic president might cite to pursue a pet project opposed by Congress.

The Democratic-controlled House voted last month by 245-to-182 to nullify Trump’s emergency declaration.

The Senate, narrowly controlled by Republicans, is to vote on the same resolution this week. At least four members of Trump’s party have said they plan — despite pressure from Republican leaders and the White House — to join Democrats in opposing the declaration.

That would provide a majority for overturning the declaration, and Trump would then be expected to veto the bill, his first use of presidential veto power.

“He’s going to veto this,” John Barrasso, the third-ranking Senate Republican, told Fox News, “and then his veto will be sustained. They will not be able to override the veto.”

Overriding a presidential veto requires a two-thirds vote in both houses of Congress.