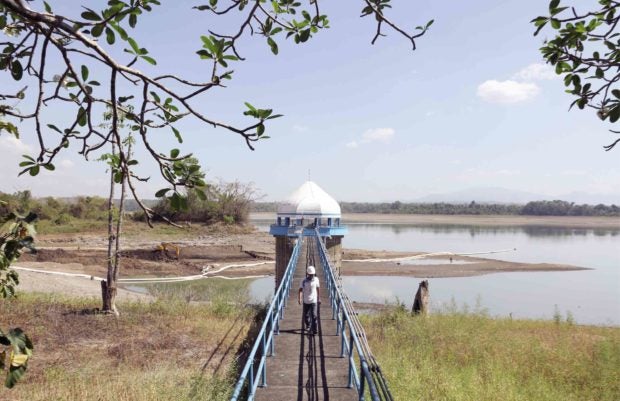 Water rationing in Metro Manila and parts of Rizal province looms as the water level at La Mesa Dam continues to drop with the onset of El Niño, a dry spell triggered by periodic warming in the eastern Pacific Ocean.

As of 4 p.m. on Sunday, water elevation at the dam had dropped to 68.93 meters, breaching the 69-meter critical low level.

It may further go down due to increased demand, according to the Philippine Atmospheric, Geophysical and Astronomical Services Administration (Pagasa).

Pagasa hydrologist Richard Orendain said the water level at La Mesa Dam had fallen because there had been no significant rainfall since December in Novaliches, Quezon City, where the dam’s watershed is located.

La Mesa, an earth dam, has an ideal water level of 80 meters.

Demand for water from consumers in Metro Manila and surrounding areas has increased, partly due to the onset of El Niño, Orendain said. (See related story in Metro, Page A12.)

“As time goes on, and especially with increased temperatures, the demand really rises, compared to colder months,” he said.

Manila Water Inc., which gets its water supply from La Mesa Dam, has implemented pressure and supply reduction schemes, which resulted in service interruptions in parts of the metropolis.

Although La Mesa Dam elevation levels are critical, Angat Dam in Bulacan province, which supplies water to La Mesa, has a healthy level of 200.97 meters as of
6 a.m. on Sunday, according to Orendain.

According to Manila Water, its customers in Metro Manila in 2018 required 1,650 MLD (million liters per day).

“[The] objective [is to have] a window where people will have water, and for them to store water for their needs,” Sevilla said in a text message.

Orendain said water utilities should inform customers about service interruptions, which may continue, especially since the country was now feeling the effects of El Niño.

He said service interruptions were necessary for water utilities to try to extend supply until the onset of the rainy season.

Water at La Mesa Dam is expected to be replenished by the end of May or the first week of June, according to Pagasa.

The two concessionaires in Metro Manila—Manila Water and Maynilad Water Services Inc.—rely on the water supply from Angat, Ipo and La Mesa dams. Water from Angat passes through Ipo where it is released to La Mesa.

Maynilad also draws from Laguna Lake water that it filters for distribution to customers in southern Metro Manila (Muntinlupa, Las Piñas and Parañaque cities, and parts of Cavite province).