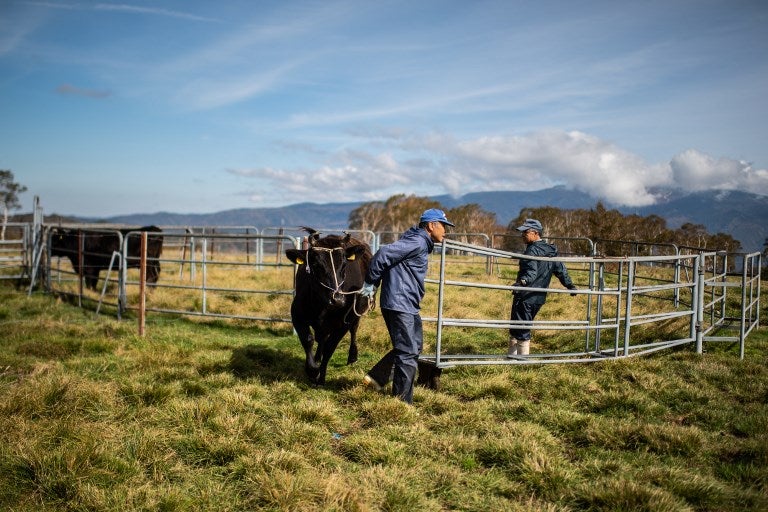 This picture taken on October 13, 2018 shows handlers with cattle at a ranch raising livestock for wagyu beef in Takayama. AFP FILE PHOTO

OSAKA — The Osaka prefectural police on Saturday arrested two men on suspicion of smuggling the sperm and fertilized eggs of wagyu Japanese beef cattle into China in violation of the Domestic Animal Infectious Diseases Control Law and the Customs Law.

The Osaka prefectural police on Saturday arrested two men on suspicion of smuggling the sperm and fertilized eggs of wagyu Japanese beef cattle into China in violation of the Domestic Animal Infectious Diseases Control Law and the Customs Law.

The government bans the export of wagyu genetic resources. However, it is rare for such smuggling to become a criminal case in Japan, according to investigative sources.

The law requires those who import and export animals and meat products to undergo a quarantine inspection to prevent the spread of diseases that may be present in domestic animals. Penalties are imposed on those who violate the law, such as imprisonment of up to three years and a fine of up to ¥1 million (about $9,000).

The two men are Yusuke Maeda, 51, living in Fujiidera, Osaka Prefecture, who runs a grilled meat restaurant, and Toshiki Ogura, 64, an unemployed man and Maeda’s acquaintance who lives in Osaka city.

Maeda directed Ogura to take the fertilized eggs and sperm to Shanghai around June last year, the sources said. However, Ogura returned to Japan after being told in Shanghai that he lacked the necessary Japanese inspection certificate, and handed over the eggs and sperm to the Osaka Customs.

Maeda was quoted as telling the police that a Chinese acquaintance asked him to bring the sperm and fertilized eggs to China, that the acquaintance directly handed him the container, and that he was unaware a quarantine inspection was necessary.

Meanwhile, Ogura told police that Maeda had reassured him there was no problem in transporting the items out of the country, and that he was unaware such an act was illegal, the sources said.

By tracking the sales route of the container, police determined that the sperm and fertilized eggs in question came from a livestock farmer in Tokushima Prefecture, according to the sources. The farmer told police he had sold them to a stranger for several million yen.

As the farmer failed to issue a certificate at the time of the sale as required by the Improvement and Increased Production of Livestock Law, police are also investigating the incident.

The government has banned the export of the sperm and fertilized eggs of wagyu since 2000.

Read Next
Feeding program in Tarlac sends 39 Aetas to hospital
EDITORS' PICK
Omicron: What science knows so far about latest Greek-lettered COVID variant
DOH: Booster doses for fully vaxxed adults to start December 3
This new condo in the South will make you want to turn a new leaf
NGCP transmission tower in Lanao del Sur bombed
Legarda: Ending Violence Against Women, a cause for all
Smart offers wireless fiber-like speeds to Filipino homes with country’s first 5G Prepaid Home WiFi
MOST READ
‘Maski na hindi ‘yung mga bright’: Duterte urges public to elect new leaders
Pacquiao to voters: If you can’t vote for me, then don’t vote for a corrupt candidate
Sereno warns: Those accusing Kris Aquino of ‘stealing’ Marcos jewels will face criminal case
Roque defends Bongbong Marcos: ‘He was only 15 years old in 1972’
Don't miss out on the latest news and information.