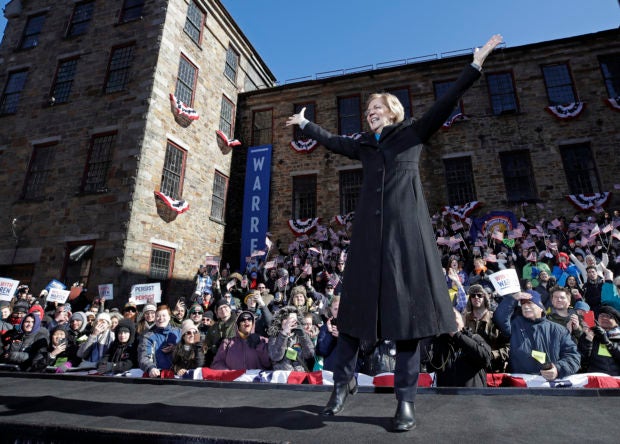 In this Feb. 9, 2019, file photo Sen. Elizabeth Warren, D-Mass., acknowledges cheers as she takes the stage during an event to formally launch her presidential campaign in Lawrence, Mass. Presidential candidates have used thematic songs to great effect in recent times. But using tunes to help connect with voters can cause trouble for presidential hopefuls if musicians object to it. And that’s what Warren could be finding out is the case with Dolly Parton’s “9 to 5.” Image: AP/Elise Amendola

When Elizabeth Warren took the stage to launch her presidential run to the strains of Dolly Parton’s “9 to 5”, the song seemed to sum up the spirit of a candidacy built on giving workers a fairer shake.

Only days earlier, fellow Democrat Kamala Harris had exited her own campaign kickoff rally with an equally fitting musical choice of “My Shot”, an anthem of ambition for political change from the hit musical “Hamilton”. The song’s chorus, delivered by a young Alexander Hamilton, underscored Harris’ confident emergence as a top-tier White House contender: “I’m just like my country, I’m young, scrappy and hungry, and I’m not throwing away my shot.”

But using campaign songs to help connect with voters can cause trouble for presidential hopefuls if musicians object to the use of their works, as Warren could be finding out.

“We did not approve the request, and we do not approve requests like this of (a) political nature,” Parton’s manager, Danny Nozell, told The Associated Press by email when asked about the Massachusetts senator’s use of “9 to 5”.

Nozell, CEO of CTK Management, did not respond to a question about whether Parton’s team might register any formal complaint about Warren’s use of the song, which she played during a Friday town hall meeting in New York City.

If Parton escalates the matter, there’s no shortage of precedent: The late Tom Petty reportedly sent a cease-and-desist letter to Rep. Michele Bachmann, R-Minn., over the use of his song “American Girl” in her 2011 campaign, and former President George W. Bush got a similar letter from Petty over his choice of the singer’s “I Won’t Back Down” during the 2000 campaign.

President Donald Trump has faced his own rejection from popular artists after taking office, most recently from Rihanna. She tweeted in November that “not for much longer” would her music be permitted to play at Trump rallies, and soon after her representatives reportedly sent their own cease-and-desist request.

The Warren campaign declined to comment on Nozell’s response regarding its use of “9 to 5”.

Guidelines for the use of campaign songs from the American Society of Composers, Authors and Publishers state that “it may be easier for” campaigns to be licensed through performing rights organizations such as ASCAP, BMI, or SESAC to ensure that the use of songs at multiple large venues fully adheres to copyright statutes.”

“Because licenses for venues such as convention centers and hotels generally exclude rights to perform music at events organized by a third party, political campaigns need their own ASCAP license to use the works in its repertory,” the organization states.

The Recording Industry Association of America, however, notes in its own guidance that licensing to use a specific song “can be obtained by either the campaign or the venue.”

When campaign songs catch on, the relationship between candidates and their favorite tunes can prove fruitful.

One of Obama’s favorites, Stevie Wonder’s “Signed Sealed Delivered I’m Yours”, was performed live at the 2008 Democratic National Convention as well as during one of Obama’s inaugural balls. In 2009, Obama revealed more about the deeper relevance of Wonder’s music to his relationship with wife, Michelle.

“I think it’s fair to say that had I not been a Stevie Wonder fan, Michelle might not have dated me,” Obama said during remarks honoring Wonder at the White House. “The fact that we agreed on Stevie was part of the essence of our courtship,”

It’s still early in the 2020 Democratic primary, giving candidates plenty of time to develop their campaign playlists. But the early choices by Warren and Harris indicate that this year’s hopefuls are aware of the keen importance of music in building a candidate’s public persona.

Vermont Sen. Bernie Sanders concluded his own campaign launch with “Power to the People”.

Harris’ use of “My Shot” isn’t even her first public selection of a favorite tune. The California senator is an avid music fan — she recorded a “mood mix” for “The Late Show with Stephen Colbert” this year — and has also used “California Love” by Dr. Dre and Tupac Shakur as a walk-on song for public events.

The rap-infused remix of “My Shot” first appeared on a playlist Harris created in 2017 for African-American Music Appreciation Month before she used it as exit music for her campaign kickoff rally in January.

No matter how a campaign obtains its license, the use of a song is unlikely to prove problematic unless the artist behind the work raises an objection. A representative from Sunshine Sachs, publicists for “Hamilton” creator Lin-Manuel Miranda, said they are “happy” that Harris enjoyed “My Shot”.

And Miranda and Parton aren’t the only artists popping up early on the presidential campaign trail. Minnesota Sen. Amy Klobuchar entered her White House kickoff rally last month to “The Bullpen” by Dessa Wander, an eclectic artist from Klobuchar’s home state.

“I hope that your battery’s charged, ’cause I found this here ladder,” sings Wander, who uses the stage name Dessa. “Now your ceilings don’t matter. Check me out, now I got glass floors.” CC