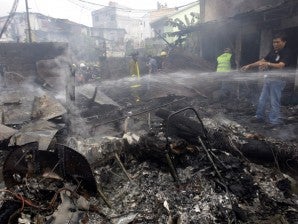 A fire department investigator checks on the site of a plane crash which razed a number of structures Saturday (Dec. 10, 2011) in suburban Paranaque City, south of Manila, Philippines. A light plane crashed into a school building Saturday near the Philippine capital after its pilot requested an emergency landing shortly after takeoff, killing over a dozen of people. PAT ROQUE / AP PHOTO

The plane crash that left 13 people dead on Saturday in Parañaque City highlighted once again the need for open spaces and clearings around the country’s main airport, according to the Civil Aeronautics Administration of the Philippines (CAAP).

In a phone interview, CAAP Director General Ramon Gutierrez on Sunday said the crowded area around Ninoy Aquino International Airport (Naia) was among the reasons cited by international regulators to downgrade the Philippines’ rating in 2008.

“We cannot improve our category rating because we lack the land area specified in the international standards,” Gutierrez said. “That’s why if you noticed, major airports in other countries are located in the countryside.”

The Beechcraft Queen Air cargo plane plunged into a shantytown shortly after takeoff, exploding on impact and causing a fire that gutted a 2,000-square meter section on either side of an open sewer.

Three people aboard were killed. The other fatalities, mostly children, were residents who died in the inferno that destroyed 50 ramshackle dwellings, according to Parañaque Mayor Florencio Bernabe.

Investigators were still looking into the cause of the crash on Taiwan Street near a creek at Better Living subdivision that still reeked of burning airplane parts Sunday.

At the very least, the crash could serve as an “eye opener” to policymakers in fast-tracking plans to transfer Naia operations out of the most congested urban metropolis in Southeast Asia, Gutierrez said.

He was referring to government plans to move major air traffic at Naia to Clark International Airport in Pampanga, a former US military air base now used by budget airlines.

In a text message to the Philippine Daily Inquirer, Chief Inspector Jenny Tecson of the Southern Police District (SPD) identified the fatalities aboard the aircraft as Captain Timoteo Albo, his copilot Jessie Kim Lustica, and Julius Dorado, the lone passenger.

At least three bodies at the crash site were also identified: Maribel Nolasco, Margarita Berdera and James Brayan Ranon. The identities of the seven remaining victims were still being ascertained, according to Tecson, the SPD spokesperson.

Beth Nabor, a housewife, said she thought the pilot was attempting to land in the area because of the open space and a creek but obviously miscalculated.

She said children had told her they saw people aboard the plane frantically waving and motioning them to run away from its path moments before the crash.

“The children thought that the plane was doing an exhibition until it crashed and was reduced to ashes like it was made of paper,” Nabor said.

“We hope someone would be punished because of this,” Rommel Molina, 28, a construction worker whose sister Rodilyn remained in critical condition after sustaining fourth to fifth degree burns. His wife and child were also injured.

Molina was on the second floor of his house when he saw the aircraft hover a few meters above the tallest tree in the area. “When I heard what sounded like gunfire at least twice, I jumped off from the window,” Molina said.

The explosion shook the ground and flames engulfed one house, killing all those inside—a couple, their child, a relative and a visitor, Molina said. These five were found huddled and locked in embrace as if holding each other was their last resort to survive, he said.

Saturday’s crash was the worst such incident to hit the area since October 2009 when a cargo plane bound for Palawan crashed into a warehouse and burst into flames in Las Piñas City, killing at least four people aboard and destroying 15 houses.

In February 2008, a single-engine Cessna plane belly-landed in a cogonal patch at the reclamation area in Parañaque between Diosdado Macapagal and Roxas Boulevards, within sight of the crowded SM Mall of Asia. The aircraft’s pilots miraculously survived.

In April 2007, a two-seat Cessna 206 fell and exploded on a residential lot at Merville village, killing its pilot. No houses were damaged but the plane was completely burned.

In November 2002, a twin-engine Fokker 27 plane crashed into Manila Bay minutes after takeoff, killing 19 people aboard en route to Laoag City. With reports from AFP and Kate Pedroso, Inquirer Research