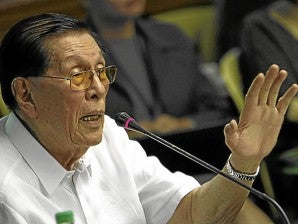 Senate President Juan Ponce Enrile on Sunday urged the government to make public the records of the defunct National Intelligence and Security Authority (Nisa) because these would provide more interesting details about the Marcos dictatorship, including the so-called Binondo Central Bank.

“Nisa had a lot of projects then, including Project Luntian (Green) that focused on the Binondo Central Bank,” Enrile, the martial law administrator, said in an interview.

He said that then dictator Ferdinand Marcos ordered to buy all the dollars available in the market and to send these to an account in a bank in Hong Kong. “Those funds were used to prop up the Philippine economy that time,” he said.

The Philippine government resorted to dollar rationing in the early 1980s amid a crushing debt crisis that followed the assassination of opposition Senator Benigno Aquino Jr.

The underground dollar market, based in Binondo, Manila, became one of the sources of much-needed green backs for the government.

Enrile, the defense minister during martial law, said that the account in Hong Kong had yet to be liquidated. “I just don’t know who is supposed to do that. The President put Bobby Ongpin in charge then together with

Roberto “Bobby” Ongpin was then the trade minister, and Fabian Ver the chief of staff of the Armed Forces of the Philippines.

A day after the Philippine Daily Inquirer ran a banner story on the handover of the second batch of martial law documents by the Department of National Defense (DND) to the Commission on Human Rights, Enrile said he wanted Nisa records on Project Luntian turned over to the Bangko Sentral ng Pilipinas.

While Enrile welcomed the move of the DND to declassify 30-year-old records of the Intelligence Services of the AFP, he recalled that the Nisa had “wider coverage” and mentioned Project Luntian to illustrate the scope of its surveillance powers during the Marcos regime.

The Nisa and the Civil Intelligence and Security Agency were replaced with the National Intelligence Coordinating Agency in 1987, a year after the Marcos regime fell.

Enrile said he learned that it was only Ongpin, “who knew of the bank account in Hong Kong.”

The Senate President recalled that other government officials who were involved in some way in the project were the governor central bank and probably the internal revenue and customs commissioners.

“But I don’t recall that they included the secretary of finance. The Nisa also involved the Department of Justice and even the Department of Environment and Natural Resources. The report on (the Binondo Central Bank) was with Nisa because the enforcement unit of Project Luntian was Nisa under General Ver reporting directly to the President,” Enrile said.

While Enrile claimed awareness of the Project Luntian, he clarified that he did not know of its details and that he had no plans of using his powers as a senator to call for a probe. “The (Bangko Sentral ng Pilipinas) should be the one to investigate that,” he said.

Ongpin, who admits his closeness to Jose Miguel Arroyo, husband of former President Gloria Macapagal-Arroyo, is also accused of receiving P660 million in behest loans from state-owned Development Bank of the Philippines (DBP) which he used to buy DBP’s Philex shares in 2009.

Asked whether Project Luntian was beneficial to the economy. Enrile said: “I don’t know if it was.”

But Marcos’ defense minister apparently took the turnover of the martial law records as an opportunity to set the records straight about the activities of his office at the time.

“Because everyone is talking now and most of the (insinuations against martial law are) concentrated on the defense department. That’s not true. I have kept records of everything that transpired during my time there,” he said.

Enrile said opening the Nisa records would be an essential part in scrutinizing the martial law period. Marcos declared martial law in 1972 and formally lifted it in 1981.

The Senate President said that he himself was interested in the work of the Nisa because it was “outside of my department.”