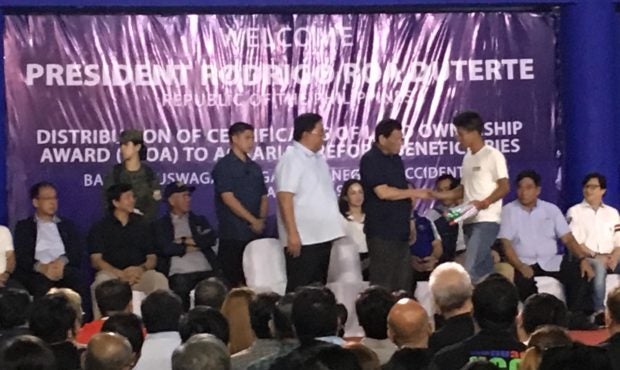 SAGAY CITY, Negros Occidental—President Duterte has ordered the Department of Agrarian Reform (DAR) to distribute government-owned lands, including those in the mountains to agrarian reform beneficiaries within the last three years of his term.

He made the announcement in a speech during the ceremonial distribution of 3,423 Certificates of Land Ownership Award (CLOA) to representatives of 2,495 agrarian reform beneficiaries at the Balay Kauswagan in Sagay City, Negros Occidental Friday night.

“I told (DAR Secretary John) Castriciones to give it to the people, including land located in the mountains,” he said.

“CARP (Comprehensive Agrarian Reform Program), it is the law and I will implement the law”, he added.

While the law was implemented during the term of President Corazon Aquino, Duterte said there is a problem with the distribution of the land covered by CARP.

“The problem is (that) the distribution has been slow because there are some people who do not want to let go of their land,” he stressed.

Duterte promised the agrarian reform beneficiaries who received their CLOAs during the ceremonial distribution that they would receive fertilizers and support services.

He also vowed to give each of them cellular phones so they could report their complaints if these promises are not fulfilled.

Telecommunications signal, however, is intermittent in Sagay, located about 80 kilometers northeast of the capital city of Bacolod.

”I want land reform, so the lives of the poor will improve, at least in my time,” Duterte said.

In an interview, Castriciones said the President wanted private lands with valid notices of coverage and alienable and disposable government owned land distributed to the beneficiaries.

The DAR has 600,000 hectares of remaining private land up for distribution in the entire country – mostly in Negros Occidental.

Castriciones said the DAR would focus on Negros Occidental since the province remained number one in terms of land acquisition and distribution with 98,000 hectares still up for distribution.

Since CARP was implemented in 1988, the government has distributed 5 million hectares to 3 million farmers, he said.

The President, in Executive Order 75 signed last Feb. 15, ordered all agencies to identify government-owned lands that could be distributed to land reform beneficiaries.

“The advantage of that is that government-owned lands do not need to be paid for by the beneficiaries. They will be given out for free”, Castriciones said.

Agriculture Secretary Emmanuel Pinol said his department would work hand in hand with the DAR to provide support services to enable the agrarian reform beneficiaries to succeed in tilling and making their newly acquired land productive. / gsg