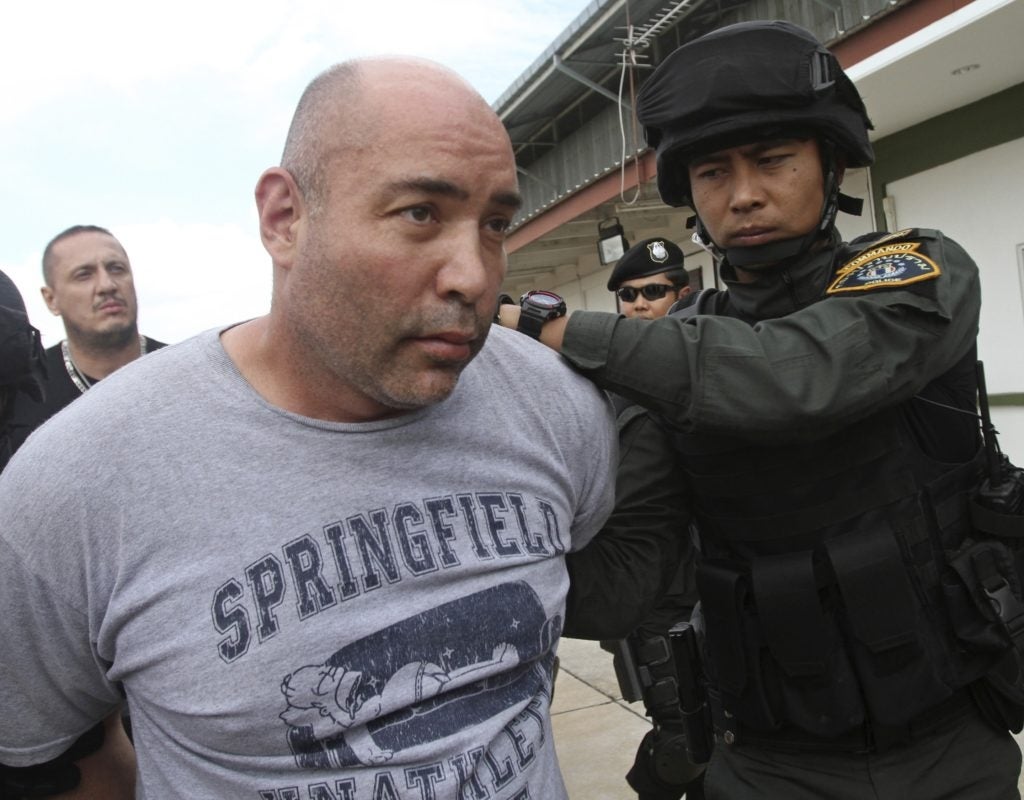 CONVICTED Joseph Hunter during his arrest by Thai police in Bangkok in 2013. —AP

NEW YORK — A former US soldier known as Rambo who became a mercenary for drug dealers was sentenced to life in prison on Thursday by a judge who cited his “truly horrific crimes.”

Joseph Hunter, 53, a onetime Army sergeant from Owensboro, Kentucky, with a Special Forces background, was sentenced by US District Judge Ronnie Abrams in Manhattan.

She said he carried out his crimes, including arranging the February 2012 murder of a real estate agent in the Philippines, for money.

The judge said she had never before seen such a “total and complete lack of respect for human life.”

Abrams said Hunter had “planned and committed truly horrific crimes” and then spoke of kidnapping, torture and assassination to recruits as if “it was a business, plain and simple.”

“I was struck by how matter-of-fact it was,” said the judge, who recalled rewatching videos introduced at the trial of Hunter instructing recruits as she prepared for the sentencing.

She said the only emotion she detected was pride as Hunter said the work would be like performing in a “James Bond” movie. “This wasn’t a movie. Real lives were taken,” Abrams said.

The life prison sentence announced by Abrams was mandatory. Hunter, listed with the alias “Rambo” in an indictment, was serving a 20-year prison term after another conviction.

Hunter, who served in the US Army from 1983 to 2004, declined to speak before the sentence was announced. In the Army, Hunter led air-assault and airborne infantry squads, served as a sniper instructor and trained soldiers in marksmanship.

Prosecutors said after leaving the military, Hunter tortured, kidnapped and killed people for years along with other former soldiers.

But it was the killing of a Filipino real estate agent, Catherine Lee, that resulted in a conviction at trial and Thursday’s sentencing.

Prosecutors said Hunter and two other ex-American soldiers agreed to become contract killers for an international crime boss who wanted to settle a score with the broker.

Two other ex-soldiers, Adam Samia, 44, and Carl David Stillwell, 51, both of Roxboro, North Carolina, arranged for Lee to show them several real estate properties. Samia then shot Lee twice in the face with a pistol that had a silencer before he and Stillwell dumped her body on a pile of garbage, prosecutors said.

Samia and Stillwell, convicted at trial along with Hunter, were already sentenced to life in prison by Abrams.

In a release, US Attorney Geoffrey S. Berman said: “With zero regard for human life, Joseph Hunter callously helped to arrange the murder of a Filipino woman in exchange for money. He and his codefendants have now been sentenced to life behind bars for their heartless crimes.”

A defense lawyer, Arnold Jay Levine, had cited post-traumatic stress disorder as a mitigating factor, saying years in the military had taken a toll on Hunter.  “The country still owes something to Mr. Hunter,” he said. —AP