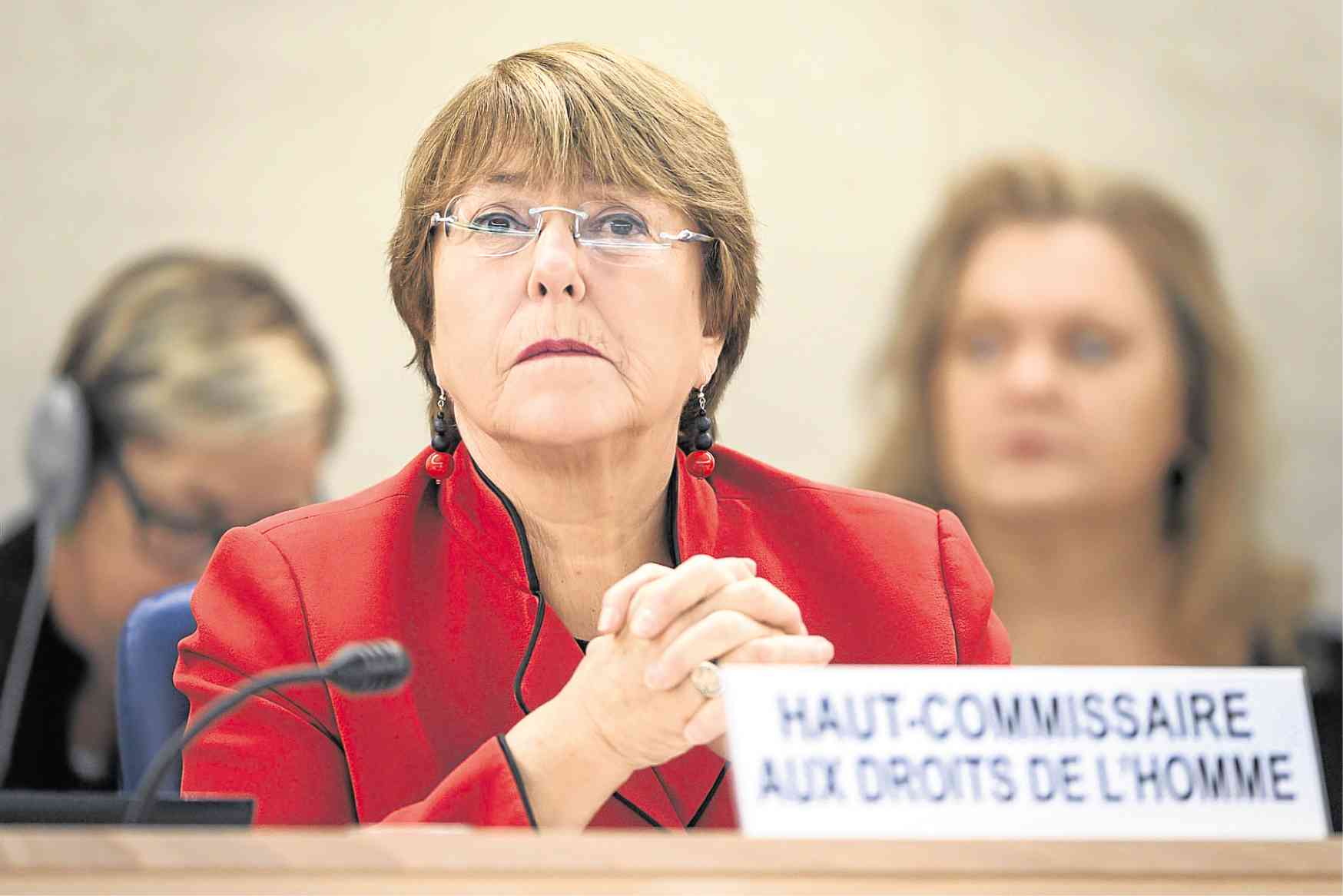 United Nations human rights chief Michelle Bachelet said the Philippines’ war on drugs should not be held up as a model by any country fighting narcotics because it went against the rule of law and international standards.

The former Chile president, who assumed as UN High Commissioner for Human Rights last September, denounced the killings of thousands of drug suspects, the harassment of critics of the government and threats against UN special rapporteurs under the Duterte administration.

“The drug policies in place in the Philippines, and its lack of respect for rule of law and international standards, should not be considered a model by any country,” Bachelet said in her annual report to the UN Human Rights Council in Geneva, Switzerland, on Wednesday.

She said “several sources” estimated that up to 27,000 people may have been killed in President Duterte’s antidrug campaign since his election in May 2016.

“Despite serious allegations of extrajudicial killings, only one case—the widely reported killing of a teenage boy—has been subject to investigation and prosecution,” she said, referring to the case of 17-year-old Kian delos Santos whose murder by policemen triggered public outrage against the antidrug campaign in 2017.

Presidential spokesperson Salvador Panelo slammed Bachelet’s report “as reckless and irresponsible,” saying she had based it on “the usual vintage and false information” supplied by detractors of Duterte, including “the politicized UN rapporteurs.”

He cited the “grossly inflated” number of people killed in the drug war, saying official figures show a much smaller number of around 5,000.

Panelo said Bachelet also “forgot” a second case where the government took action against policemen who “erred” in the conduct of the drug war, referring to two officers who were dismissed in connection with the killing of 19-year-old Carl Arnaiz, also in 2017.

The government’s campaign against illegal drugs is “anchored on the protection of its citizenry as well as accountability of the enforcers of the law,” he said.

“Our law enforcement authorities follow strict procedures and protocols in the conduct of anti-illegal drug operations that subject those involved to accountability given the President’s zero tolerance for errant law enforcers,” Panelo said.

Bachelet said drug users needed help to rebuild their lives and that “drug policies should not be more of a threat to their lives than the drugs they are abusing.”

“I encourage the Philippines to adopt a public health approach and harm reduction initiatives that comply with human rights standards, as recommended to the 2016 General Assembly Special Session,” she said.

Panelo acknowledged that the “drug menace is more than a public security threat, it is likewise an issue on poverty and health.” He said the government was providing treatment and rehabilitation to drug dependents.

“The Philippines’ multipronged strategy of enforcement, rehabilitation and reintegration has reduced crime, held criminals accountable and kept Filipino families safe. That is why the Filipino people who see the results of our efforts every day support the campaign,” he said.