S. Korea to push for artificial rain experiment with China 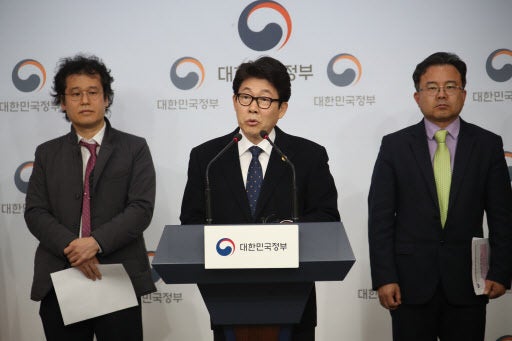 The ministry said it would push for an artificial rainfall experiment over the sea between the Korean Peninsula and China this year, and exchange rain-making technologies with the neighboring country.

“To reduce fine dust that enters Korea from abroad, it is better to conduct an artificial rain experiment over the Yellow Sea, rather than in inland areas, given the weather conditions,” Cho said at a press briefing. “We believe artificial rain will be effective in reducing levels of fine particles in the air.”

Korea’s first experiment this year with artificial rain, in which chemicals are released into clouds to induce rain, failed to cause precipitation and the experiment will be repeated in March, the ministry said.

The measures were announced after President Moon Jae-in on Wednesday called for all-out measures, including joint action with the Chinese government, to fight particulate pollution.

High levels of ultrafine dust — particles smaller than 2.5 micrometers in diameter and known as class one carcinogen — blanketed most parts of Korea for more than a week until Thursday. In Seoul and the surrounding areas, emergency measures to combat pollution were enforced for a record seven consecutive days.

The government actions so far have failed to effectively reduce levels of ultrafine dust, triggering criticism that it is only scratching the surface without addressing what Koreans see as the major source of pollutants — China.

China does not deny contributing, but says Korea is mainly responsible for the high levels of ultrafine dust in the country.

Korea’s top diplomat stressed there is link between China and the worsening air pollution in Korea.

“It’s true that there’s a cause (of fine dust) stemming from China,” Foreign Minister Kang Kyung-wha told reporters in the National Assembly.

In response, Chinese Foreign Ministry spokesman Lu Kang said at a press briefing Thursday Korea should “face what is the real cause” of fine dust pollution to fundamentally solve the problem and ease public concerns.

Environment Minister Cho said that Seoul and Beijing agreed to stop politicizing the issue and that the two sides will continue to conduct scientific research and collect data on how much China contributes to air pollution here.

When the density of dust pollution is high on the Korean Peninsula, a large portion of the fine dust — more than 70 percent — is believed to come from China, according to government estimates.

As for the heavy concentration of PM2.5 in recent days, the state-run agencies said that low circulation of air over the Korean Peninsula, a result of climate change, and pollutants from overseas were the main contributors.

Seoul and Beijing have already agreed on a series of measures — including establishing a joint system for issuing fine dust forecast and alerts — at their ministerial meeting in February. Seoul believes the system will increase the accuracy of weather forecasts.

To reduce domestic emissions, the ministry plans to expand the operation of water sprinklers and shut down two old coal power plants earlier than scheduled.

The ministry also seeks to install air purifying facilities outdoors at a cost of 100 million won to 200 million won each this year, securing supplementary budget for the pilot project.

It is also considering toughening the dust-reducing emergency measures in stages as days with high levels of ultrafine dust continue, which could involve a complete ban on government and public-sector vehicles from streets.