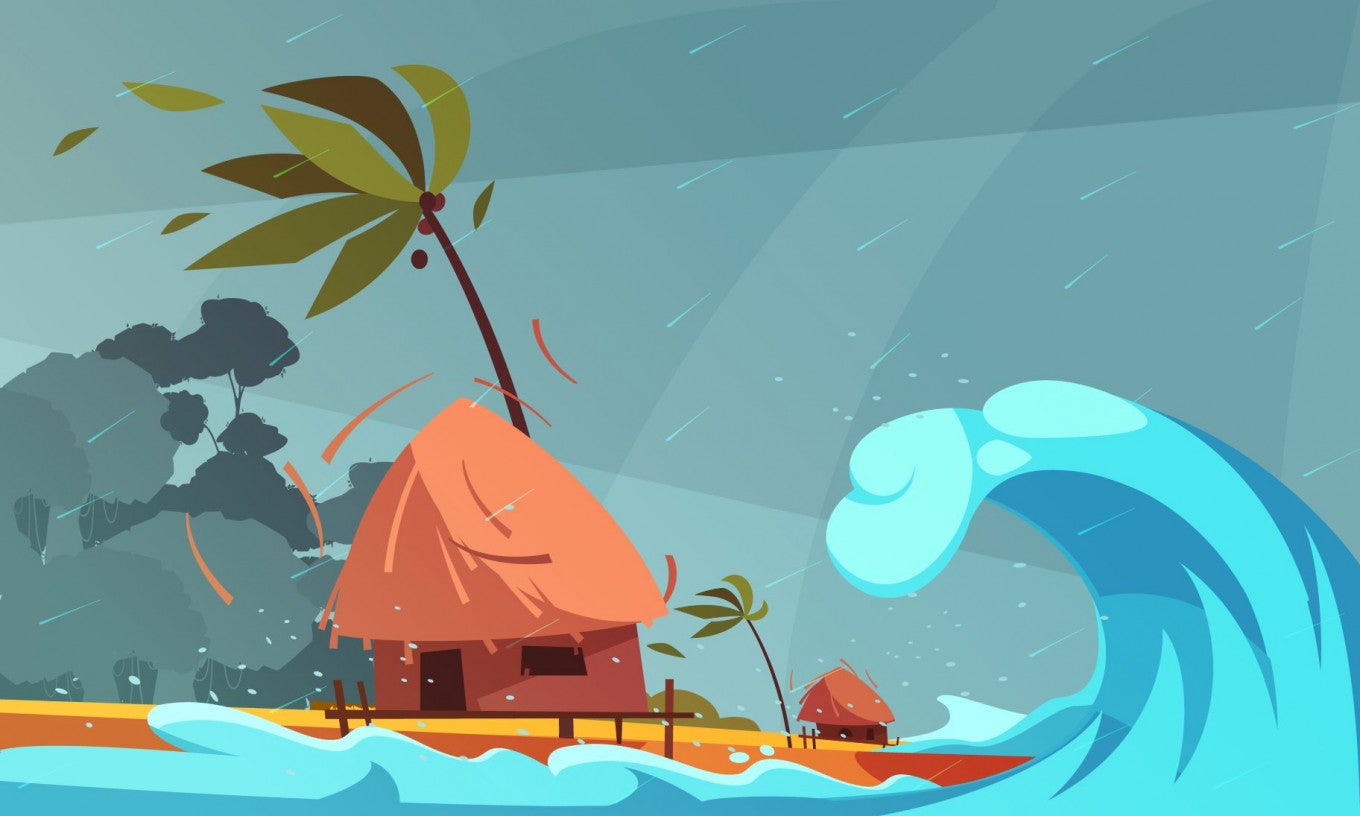 In this country, we humans are forever at the mercy of nature. Shutterstock via The Jakarta Post/Asia News Network

MALANG, East Java — No imagination is needed to know why William Dampier named the westernmost part of Australia Shark Bay.

The English explorer and naturalist would have marveled at the wildlife back in 1699. It’s still there in what is now a World Heritage Site, 830 kilometers north of Perth. Apart from the Noahs (Ozzie slang for sharks), thousands of dugong and dolphins thrive in the globe’s largest seagrass meadows.

A smart observer though he was, Dampier didn’t notice the huge limestone blocks sitting incongruously far from the ocean, or thought them unworthy of record.

What he discovered should send all Indonesian coastal dwellers packing their belongings and heading for the interior right now.

The boulders, some estimated to be 700 tons, had been smashed off the coastal cliffs.

They were then gathered by a giant wave, chucked 250 meters inland and dumped 15 meters above sea level.  The only force that could have rearranged the landscape so dramatically would have been a tsunami.

However not like those last year in Palu and the Sunda Strait.

Remember the lead character in the Peter Jackson movie King Kong swatting planes like tennis balls? To appreciate a megatsunami, imagine the monster gorilla even bigger and stronger, but minus the romantic feelings for heroine Ann Darrow.

When the late Dr Playford’s research was published he said dating had shown that while most rocks were moved between 2,900 and 5,000 years ago, one upheaval was only six centuries before the present.

The mammoth waves weren’t confined to Shark Bay. Over time they shaped 3,500 kilometers of the continent’s northwest coastline, leaving some of the world’s largest megatsunami deposits.

These awesome events weren’t conceived in Australian waters; they began when the Indonesian Archipelago’s geology stirred itself after its irregular lie-downs.

Playford suggested the awakenings were underwater volcanoes or massive landslips, like the one at Anak Krakatau in December.  An asteroid plunging into the Indian Ocean is another possibility.

Australia is relatively stable; it’s not part of the Ring of Fire circling the Pacific and Indonesia. The continent’s few mountain ranges were thrust up aeons ago. Many have been eroded to hills by wind, rain and sun.

There are no active volcanoes. Earthquakes are few, usually small and rare in built-up areas.

The most recent world event was in 1980 at Spirit Lake in Washington State, the United States, when the Mount St Helens volcano exploded. Water surges up to 250 meters were reported. This was a sparsely populated area so the death toll was only 57.

The most fearsome megatsunami in recorded history was in 1883 when Krakatau blew up in the Sunda Strait. Pressure waves circled the globe three times.

The bang was heard in Perth, 3,000 kilometers distant; it was reckoned to be four times greater that the largest human-made explosion ever. This was the Soviet hydrogen weapon Tsar Bomba detonated in 1961 at an Arctic Ocean test site.

About 36,000 may have been killed by Krakatau and the ash fallout, which darkened the heavens for weeks. That number is suspect; communications were poor and there was no centralized agency to count corpses.

Java is now the most densely populated island in the world. Even if all the early-warning system reforms promised by the government are implemented, they’ll offer no protection against a megatsunami.  That’s because there’s no coastal high-ground safe against waves topping the 132-meter National Monument (Monas) in Jakarta.

The nearest sanctuary in East Java would be Malang, 444 m above sea level and far enough from the coast for the energy of a megatsunami to exhaust before it reaches the city. But it’s not totally safe; Malang is wrapped by mountains, including the highest on Java.

Semeru, 3,676 meters, has erupted 56 times in the last two centuries. It puffs like a smoker every morning. The fine ash dusts everything, including the keyboard used to air these worries.

Just a daily reminder that in this country we puny humans are forever at the mercy of nature.

Read Next
5 drug suspects dead in shootout with Bulacan cops
EDITORS' PICK
COVID-19 has infected more than 69,000 people globally
Xi’s early involvement in virus outbreak raises questions
The Najima Drive: Nissan’s MD drives #GoAnywhere adventures in new video series
Can Your Brand of Meat Be Trusted? Here’s How to Know You’re Eating Safe Meat
COVID-19 screening checkpoints remain for those going to Boracay
Can travel make you fall in love?
MOST READ
2,000 iPhones given for free by Japanese gov’t to passengers stuck on ship due to coronavirus
WATCH: Sarah Geronimo dances ‘fierce’ version of ‘Tala’
COVID-19 has infected more than 69,000 people globally
NBA loses ‘hundreds of millions’ in China over Hong Kong tweet
Don't miss out on the latest news and information.