Joy Belmonte: I’m running for QC mayor with my own leadership brand

MANILA, Philippines — Quezon City Vice Mayor Joy Belmonte is aiming to become the city’s mayor in this year’s election with her own brand of leadership, different from the style of her father, former House Speaker Sonny Belmonte.

While she acknowledged that his father’s headship technique helped her in her first term in public office, Belmonte said she has “carved” her own style of governance through the years.

“I’m running hopefully as Joy Belmonte and no longer as the daughter of the former mayor,” Belmonte told Inquirer in an interview on Thursday. 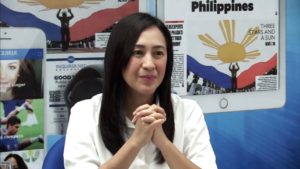 Prior to being selected as House Speaker and congressman of Quezon City’s Fourth District, her father also served as mayor of Quezon City from 2001 to 2009.

“I am trying my best to veer away from being the daughter of my father. Although it helped me win in my first run, I made a delivered effort to try to carve out my own identity and to adopt an advocacy that were never adopted from my father and have a management style different from his,” she added.

Belmonte also said that compared to her father, she is more frank and won’t mind if people would not like her.

“Mas prangka ako kaysa sa tatay ko. He doesn’t offend people; he is such a sweet man. So that is why he doesn’t have any enemies,” she noted.

“I am more of the opposite. I don’t mind having people not like me. I’m more direct to the point,” she added.

The incumbent vice mayor further pointed out that she does not say “yes” all the time as she would not hesitate telling people if a project would be impossible to implement.

“They always think politicians have to say yes all the time. But, I can hold my own and I can say when something can’t be done because that is my training in the private sector,” Belmonte said.

But if there’s one important trait that she learned from her father and continues to practice, Belmonte said it would be about “fairness.”

“Whether they are very poor or very rich, he treats them fairly. He does not favor any one group when he makes decisions. If they benefit the majority, just adopt those policies or those programs,” she said.

Belmonte is gunning for the mayoralty post of Quezon City under the Serbisyo sa Bayan Party, a regional party based in Quezon City that is allied with administration-backed Hugpong ng Pagbabago party led by Davao City Mayor Sara Duterte-Carpio. /kga