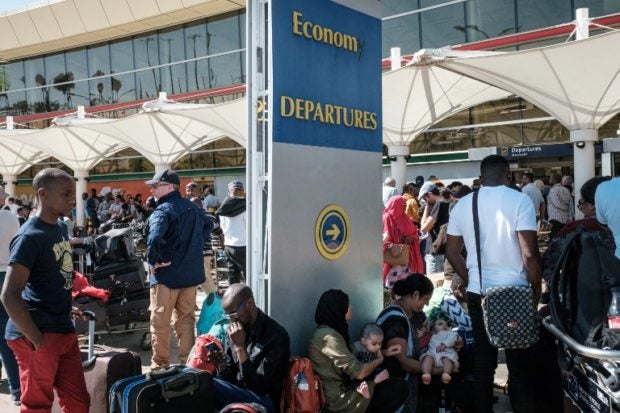 Passengers are blocked from entering Kenya Airways’s departure terminal due to a strike by the airline workers at the Jomo Kenyatta International Airport in Nairobi on March 6, 2019. AFP

With flights grounded since midnight, passengers were advised Wednesday morning not to come to the Jomo Kenyatta International Airport — East Africa’s busiest according to the Kenya Airports Authority (KAA) — until further notice.

“Kenya Airways regrettably wishes to inform its customers and the general public that due to the illegal strike by Kenya Aviation Workers Union (KUWA), the airline will be experiencing disruptions in normal flight operations,” a company statement said.

Inside the terminals, strikers faced off with police who fired teargas as they moved in to arrest union officials they accused of inciting workers.

Passengers waiting for flights, some for hours, were asked to leave the airport, and gathered in parking and waiting areas outside the building.

“I have been here since 3:00 a.m., and there is no flight, there is no information, we have just been told now to wait for communication,” stranded passenger Mercy Mwai told AFP.

Another, Christine, questioned: “why are police using unnecessary force with teargas at an airport?”

Some passengers received medical treatment on-site for tear gas inhalation, according to an AFP journalist at the airport.

The workers, who had not announced their labor action beforehand, are angry about the planned takeover of the airport, operated by the state-run KAA, by national carrier Kenya Airways.

“What they were fearing is that the proposed merger between KQ and KAA will result in job losses but we gave assurances that that will not happen,” he told journalists at the airport, and promised that flights will resume shortly.

“So this (strike) is completely uncalled for because the deal has not happened.” /ee