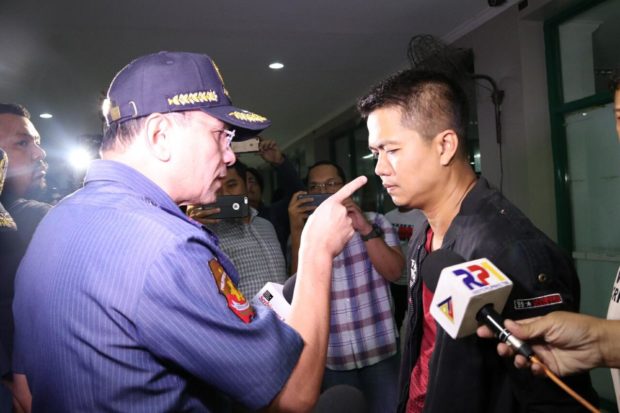 Police Corporal Marlo Siblao Quibete was caught in an entrapment operation on Tuesday night for allegedly receiving P20,000 in marked cash from a woman in exchange of dropping the charges filed against her live-in partner, who was arrested for illegal drugs.

Eleazar confronted Quibete after his arrest, as shown in videos released by the media. He also reportedly rained expletives at the arrested police officer for becoming a bad example to the police force.

But Eleazar said the angle of cameras used in the reports seemed to show he slapped Quibete.

(You know the angle of the camera may make it appear that I slapped him. I only lifted up his face because I want to look him eye to eye.)

(I did not slap him or punched him in the chest. I just lifted up his face. I also did not pull his hair. He almost did not have hair right? But I wanted to see his face.)

But Eleazar, who has also confronted alleged scalawag police officers in the NCRPO in the past, apologized for losing his temper.

“Humihingi ako ng paumanhin kung medyo hindi ako nakapagtimpi at nailabas [ko] ‘yung aking emosyon [I apologize if I have not controlled my temper and I showed my emotion],” he said, but added that misfits in the ranks should not be handled lightly.

He also said that the arrest of Quibete and the capture on Wednesday of Corporal Anwar Encarnacion Nasser from the Station Drug Enforcement Unit of the Pasay City Police Station show that the Philippine National Police is “dead serious” in its internal cleansing program. /jpv