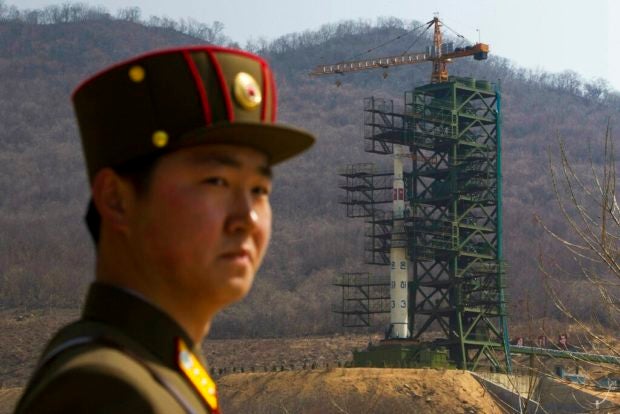 In this April 8, 2012, file photo, a soldier stands in front of the Unha-3 rocket at a launching site in Tongchang-ri, North Korea. (AP Photo/David Guttenfelder, File)

SEOUL, South Korea — North Korea is reportedly restoring facilities at its long-range rocket launch site that it had dismantled as part of disarmament steps last year.

South Korea’s JoongAng Ilbo newspaper reported Wednesday that the country’s spy service gave such an assessment on the North’s Tongchang-ri launch site to lawmakers in a private briefing Tuesday.

An article from 38 North, a website specializing in North Korea studies, cited commercial satellite imagery as indicating that efforts to rebuild some structures at the site started sometime between Feb. 16 and March 2.

Dismantling parts of its long-range rocket launch facility in the northwest was among several steps the North took last year when it entered talks with the United States and South Korea. The site is where North Korea carried out satellite launches in recent years, inviting rounds of sanctions from the U.N. that saw it as disguised test of missile technology.

JoongAng Ilbo cited unidentified lawmakers who attended the briefing as saying that National Intelligence Service director Suh Hoon told them that the structures being restored at the launch site include roofs and doors of buildings.

Suh was quoted as saying that the move is seen as a preparation to restart long-range missile test-launches in the event that nuclear diplomacy completely collapses or to add some structures to blow up the launch site more dramatically in a show of denuclearization commitment when U.S. inspectors visit if negotiations with Washington go well.

The 38 North report said the rail-mounted transfer building is being reassembled at the launch site. It said two support cranes can be seen at the building, and walls have been erected and a new roof added.

At the engine test stand, the website said it appears that the engine support structure is being reassembled. It said new roofs have been installed on the fuel and oxidizer buildings.