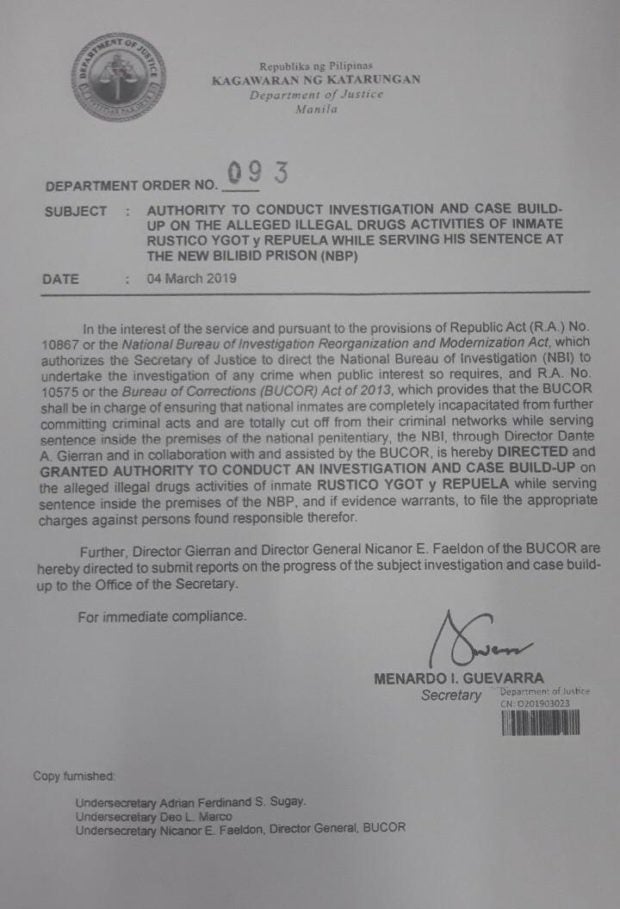 MANILA, Philippines — The Department of Justice (DOJ) has released the order that directs the Bureau of Corrections (BuCor) and the National Bureau of Investigation (NBI) to investigate drug ring activities done remotely from inside the New Bilibid Prison (NBP) using the internet.

In a Department Order No. 93 signed on Monday, Justice Chief Menardo Guevarra directed the probe after Cebu police found that a drug ring in their province is being run by Rustico Ygot, a jailed drug dealer from Bilibid.

“The NBI through Director Dante A. Gierran and in collaboration with and assisted by the BUCOR is hereby directed and granted authority to conduct an investigation and case build-up on the alleged illegal drug activities of inmate Rustico Ygot Y Repuela while serving sentence inside the premises of the NBP,” read the order.

“And if evidence warrants, to file the appropriate charges against persons found responsible therefor,” it added.

DOJ also ordered NBI Director Gierran and BuCor Director General Nicanor Faeldon to submit reports on the progress of the subject investigation and case build-up to DOJ’s Office of the Secretary.

The Philippine National Police conducted twin operations in Cebu on Sunday and seized over P190-million worth of shabu.

Police discovered that the shabu came from Jocelyn Encila, Ygot’s girlfriend, whose house is wired with closed circuit television (CCTV) cameras that Ygot had direct access to. /je