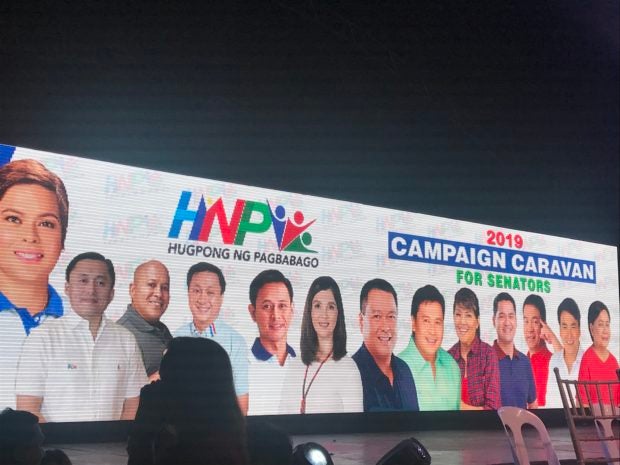 The image of Maguindanao Rep. Zajid Mangudadatu was not included in Hugpong ng Pagbabago’s (HNP) backdrop LED in its campaign sortie in Amoranto Sports Complex in Quezon City on Feb. 28, 2019. PHOTO by Darryl John Esguerra /INQUIRER.net

“I understand it was (the) inadvertence by the HNP Secretariat and we already apologized to senator candidate Dong Mangudadatu,” Duterte-Carpio told reporters Tuesday after HNP’s campaign event in Antipolo City.

She said the mistake is among the many problems they encounter in running the campaign.

“I hope it does not happen again. It has been the topic of the meetings of HNP Secretariat already,” she added.

The presidential daughter made the remark after Mangudadatu pointed to Quezon City Vice Mayor Joy Belmonte as the one responsible for the incident.

The Maguindanao representative said that Belmonte, who is running as Quezon City mayor, has political reasons for excluding his image from the LED display during HNP’s campaign sortie at the Amoranto Sports Complex last Thursday.

Mangudadatu alleged that his photo was deliberately taken off the display because of his close ties with Bingbong Crisologo, who is currently Quezon City’s 1st District Representative.

(It’s very clear that there is a little problem there. Second, I’m very close to Bingbong Crisologo. He is a good friend and we asked him to run in Quezon City.)

“That’s the essence of the culture of politics in our country. E nararapat lang na hindi nila ilagay ‘yung picture ko don sa backdrop kasi alam naman po nila na doon ako sa kabila (It is not surprising that they exclude my picture at the backdrop because they know that I’m with the other side),” he added.

Read Next
China says ‘still lots left to do’ in US trade talks
EDITORS' PICK
Cherry Mobile teams up with Cloud Panda PH, launches online store
WHO resumes hydroxychloroquine coronavirus trials
COOCAA TV Bounce Back Sale offers up to 50% off
DOLE eyeing P20-B subsidy for MSMEs
Over P785M distributed to 98K PUV drivers in Metro Manila — DSWD
SMDC The Good Guys on the Go
MOST READ
Philippines’ youngest survivor of COVID-19 dies
It’s final: Anti-Terror Bill now only needs Duterte’s signature
Piolo gets first call slip from ABS-CBN to resume ‘ASAP’ taping
‘She had no right to be in Singapore’: Youth pleads guilty to abusing Filipino maid
Don't miss out on the latest news and information.