‘Enjoy life but not to the detriment of our souls’ 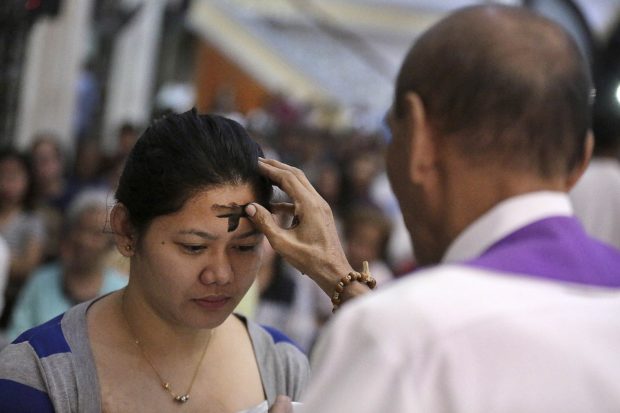 MARK OF THE CROSS On Ash Wednesday, Catholics are urged to do good work, fast and pray, and have their foreheads marked with a cross of ashes by a priest or lay minister as a reminder that everyone comes from dust. —INQUIRER FILE PHOTO

With millions of Catholics heading to churches on Ash Wednesday, Fr. Jerome Secillano on Monday shared this reflection: Enjoy life but not to the detriment of your soul.

Ash Wednesday marks the start of the 40-day Lenten season.

“Ash Wednesday reminds us of our end, of the temporariness of everything,” said Secillano, executive secretary of the Catholic Bishops’ Conference of the Philippines’ (CBCP) permanent committee on public affairs.

It is important to enjoy life while it lasts, he said, “but it should not be to the detriment of our souls.”

“We can do so many things, but remember, we will have to account for them in the end,” Secillano told the Inquirer.

On Ash Wednesday, Catholics are urged to do good work, fast and pray, and have their foreheads marked with a cross of ashes by a priest or lay minister as a reminder that everyone comes from dust.

“My brothers and sisters let us avail [ourselves] of the season of grace during Lent so that we would be really prepared into the joyous season of Easter,” Valles said over the Church-run Radyo Veritas.

The Catholic faithful are also encouraged to fast on Ash Wednesday and Good Friday, and abstain on Fridays during Lent.

Valles said the faithful should also use Ash Wednesday as an opportunity to ask forgiveness from God and help the needy.

Cardinal Luis Antonio Tagle, the Manila archbishop, exhorted Catholics to mark the start of Lent by doing small acts of charity, like helping feed children in the poorest communities across the country.

The “Fast2Feed” campaign asks people to fast and donate money to the Hapag-Asa program of the Archdiocese of Manila and its dioceses.

“We, Filipinos, have a deep relationship with our faith. The season of Lent is another opportunity for us to recenter our lives by helping those who are most in need,” Tagle said in a statement.

One of the charitable activities that the Church has been promoting, especially during this time, is the Hapag-Asa Integrated Nutrition (Hapag-Asa) program.

Hapag-Asa has actively partnered with the Church to reduce hunger and malnutrition among more than two million Filipino children by mounting regular feeding programs in the poorest and remotest areas.

To be able to continue their mission to reach and help these children, Hapag-Asa is appealing to churchgoers to donate money they are able to save from fasting to Fast2Feed.

“Under the Fast2Feed initiative as little as P10 a day can feed a child manna pack-based meal,” Tagle said.

Manna Pack is a rice meal formula fortified with proteins, Vitamin A, B, C, D and calcium, which is mixed with vegetables and commonly used for nutrition feeding programs.

“Feeding hungry children can start with our little sacrifice. Imagine how our P10 can go toward nutritious meals that may spell a difference for their future,” said Florinda Lacanlalay, Hapag-Asa program director.

Hapag-Asa is a nationwide feeding program that aims to reduce malnutrition prevalence among children between 0 and 12 years old and improve capacity of parents to care and provide for the basic needs of their children.