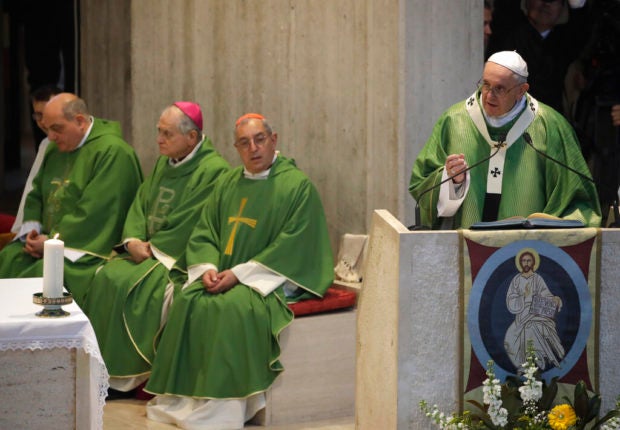 Pope Francis delivers his speech during a Mass in the St. Crispino parish church, in the Labaro neighborhood, Rome on March 3, 2019. AP

VATICAN CITY — Declaring that the church “isn’t afraid of history,” Pope Francis said Monday he has decided to open up the Vatican archives on World War II-era Pope Pius XII, who has been criticized by Jews of staying silent on the Holocaust.

Francis told officials and personnel of the Vatican Secret Archives that the archive would be open to researchers starting March 2, 2020.

Pius was elected pontiff on March 2, 1939, six months before World War II erupted in Europe. Pius died on Oct. 9, 1958, at the Vatican summer residence at Castel Gandolfo, near Rome.

The Vatican usually waits 70 years after the end of a pontificate to open up the relevant archives. But the Holy See has been under pressure to make the Pius XII documentation available sooner and while Holocaust survivors are still alive.

Vatican archivists had already started preparing the documentation for consultation back in 2006, at the behest of Francis’ German-born predecessor, Benedict XVI.

The Vatican has defended Pius, saying he used behind-the-scenes diplomacy to try to save lives. Francis indicated he, too, embraced that interpretation.

Pius’ actions will be scrutinized as part of efforts underway to decide if he should be declared a saint. Francis indicated that the church was confident that the papacy would withstand the findings by historians’ studying the archives, saying Pius was “criticized, one can say, with some prejudice and exaggeration.”

“The church isn’t afraid of history, on the contrary, it loves it, and would like to love it even more, like it loves God,” Francis told staff at the archive.

“Thus, with the same trust of my predecessors, I open, and entrust to researchers, this patrimony of documentation.”
Francis expressed certainty that historical research would properly evaluate Pius’ legacy “with appropriate criticism.”

He said the Pius papacy included “moments of grave difficulties, tormented decisions of human and Christian prudence, that to some could appear as reticence.” Instead, he said they could be seen as attempts “to keep lit, in the darkest and cruelest periods, the flame of humanitarian initiatives, of hidden but active diplomacy” aimed at possibly “opening hearts.” /ee