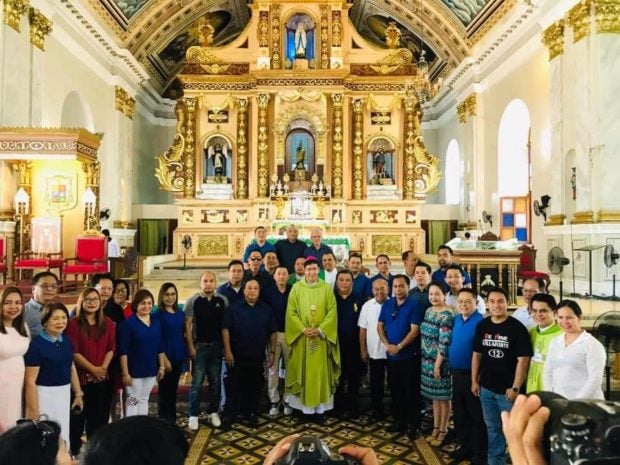 Bishop Albert Uy of the Diocese of Tagbilaran with some provincial and local officials during the peace covenant signing for peaceful midterm and local elections in Bohol province on Sunday, March 3. Some candidates including former Cabinet Secretary and Bohol gubernatorial candidate Leoncio Evasco Jr. skipped the event. Photo from Bishop Abet Uy Facebook

TAGBILARAN CITY, Bohol — A close ally of President Duterte, who is running for governor in Bohol, has turned down the invitation of the Catholic church here to sign a covenant for a peaceful election.

“Whether those who publicly affixed their signatures to the said document were party to the said irregularities or not is best left to the electorate to decide,” he wrote in a letter addressed to Bishop Albert Uy of the Diocese of Tagbilaran.

Evasco’ opponent in the gubernatorial race and his allies were among those who showed up in the covenant signing held after the 9 a.m. Mass at Saint Joseph Cathedral Parish in Tagbilaran last Sunday.

The activity, which was spearheaded by the dioceses of Tagbilaran and Talibon, also served as the launching pad for CHAMP, the dioceses’ campaign for Clean, Honest, Accurate, Meaningful and Peaceful elections.

Also in attendance were reelection Rep. Erico Aristotle Aumentado of Bohol’s 2nd district, outgoing Vice Gov. Dionisio Balite, who is running for congressman in the 3rd district, among others.

In explaining his absence in the peace covenant, Evasco wrote to Bishop Uy that he had some reservations over the holding of peace covenants that had been done in the past.

“Unfortunately such covenants did not suffice to prevent irregularities, excesses, and shortcomings in those elections,” he said.

But he assured Uy that he remained committed to abiding by the laws both of the State and the Church.

“It is a commitment that I hold solemnly before you with utmost respect and to the position to which you have been ordained, in a church to which both of us continue and will always be faithful to,” said Evasco, a former priest who turned communist rebel before deciding to work with then
mayor of Davao City, Rodrigo Duterte in the 1980s.

He assured the prelate that he would join the Church “in praying for the conduct of an election free from threats and intimidation, from vote-buying and all acts forbidden by the Constitution and the moral compass of the church.”

“The sacred trust of our people has been trampled so many times over that we cannot afford another travesty of the people’s will and prolong the agony of our people,” Evasco said. /lzb