Uneasy riders: Will ‘habal-habal’ be legal? 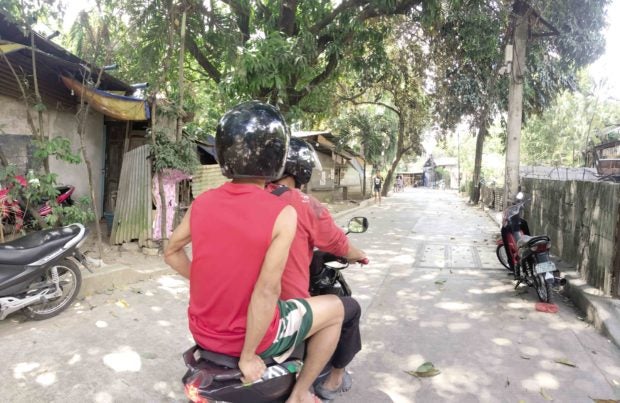 LIVELIHOOD Dozens of “habal-habal” are a common fixture in the curving slopes of Barangay Pansol in Quezon City, giving residents a means of transport and a source of income. —KRIXIA SUBINGSUBING

In the hilly community of Barangay Pansol in Quezon City, home to 17,000 people, the winding streets are so narrow and steep that tricycles have become the most practical and convenient way to get around.

But because the tricycle terminal is an exhausting 20-minute walk from the area’s highest point, Pansol residents Christine Guerrero and husband Willy organized the village’s motorcycle riders into a group called Habals in 2008.

Although “habal-habal” (motorcycles for hire) are illegal under Republic Act No. 4136, they provide the community a reliable means of transport. The group currently has 100 riders who must abide by rules set by its officers.

According to rules, members of the group must undergo a day-long training on motorcycle safety by accredited bike groups. They must also wear helmets and safety vests.

Habal riders charge P25 per passenger in a fixed route that takes them from anywhere in Pansol to the Balara gate on Katipunan Avenue, Quezon City.

The fixed route makes it easier for the group to keep track of its members if, for example, they meet accidents, according to Willy Guerrero, Habals’ former president.

If found culpable, the habal rider is not allowed to ply his route for three days or more, depending on the gravity of the accident.

“It’s self-regulation while legalization is still pending,” Guerrero said, referring to ongoing efforts to finally allow the habal-habal to operate as public transport. “It’s better to have some form of accountability over our passengers,” he added.

But while motorcycle taxis are still illegal, the group cannot provide passengers safety nets like accident insurance. This, Guerrero said, is something the group hoped to do once the government legalized its operations.

For Allan, an elementary school graduate who sought work in Manila after half of his family was killed in 2013 during Supertyphoon “Yolanda’s” (international name: Haiyan) onslaught in Ormoc, driving a motorcycle taxi was a godsend for people with limited options.

“It’s hard to find work when you have not finished high school or college,” said Allan, who met his wife in Pansol. The couple has a 3-year-old son whom they are raising with the P700 he earns every day.

“Tricycles rarely come all the way up here in Pansol, whereas a habal-habal can pick us up right on our doorstep,” Mary Ann said.

So popular is the habal-habal in the tight-knit community that each Pansol resident must have ridden one at least once in their life, said Habals member James, 26.

“It’s not just our livelihood at stake here, but the needs of those who go to work or school,” said James, referring to the local government’s unusually severe crackdown on the habal-habal.

Almost every day, James said, plainclothesmen from the city’s tricycle regulatory unit would arrest habal-habal drivers on Balara, impound their motorcycles and confiscate their licenses. They must shell out P3,500, with an interest of P70 a day, to redeem their vehicles.

For decades, motorcycle advocates have been clamoring that habal-habal be legalized, said lawyer Ariel Inton, former Land Transportation Franchising and Regulatory Board member.

But it was only when the Supreme Court slapped a temporary restraining order (TRO) against Angkas, a transport network using motorized taxis, late in 2018 that lawmakers finally stepped up efforts to recognize this alternative mode of transport.

Community habal-habal groups reaped the unexpected windfall from the TRO.

So intertwined are the fates of habal-habal drivers with those of Angkas riders that some of them have borrowed the Angkas brand name for their means of livelihood, said Angkas spokesperson George Royeca.

Congress is now rushing to amend the Land Transportation and Traffic Code to allow motorcycles to be licensed as public utility vehicles (PUVs), while the Department of Transportation is trying to put together a pilot test of the draft implementing rules and regulations of the amended law to test whether motorcycle taxis are really feasible as PUVs.

But it remains unclear if, once the law is amended, community habal-habal drivers would be required to sign onto an app-based platform, or if they would be integrated into the local government unit.

Royeca, an advocate of technology-based solutions, favors the former, while Pansol’s drivers worry vaguely about the need for smartphones for the app.

That they have gotten this far in their fight for legislation has given them hope, though.

“This is a solution that people themselves have created to solve [their transport] problem,” Guerrero said. “The only thing we need now is support from the government.”