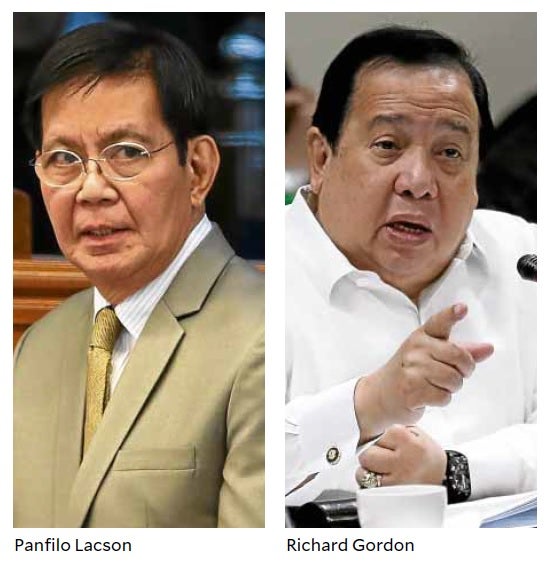 Two administration senators on Sunday opposed the plan of Interior Secretary Eduardo Año to publish President Rodrigo Duterte’s so-called narcolist in the run-up to midterm elections in May.

The Commission on Human Rights (CHR) also rejected the plan, reminding the authorities that everyone has the right to be presumed innocent until proven guilty.

While Año had given assurance that the list would be verified before being released, the CHR cautioned that its publication might cause violence during the campaign.

Senators Panfilo Lacson and Richard Gordon said the release of the list would deny politicians being linked to the illegal drug trade of due process and that the plan smacked of politics.

Lacson, a former Philippine National Police chief, said unverified information about the supposed illegal activities of government officials should only be used to build up criminal cases against them.

“Until backed by evidence, a narcolist remains unvalidated and should be used only for intelligence purposes,” he said in a text message to reporters.

“Making it public is unjust and unfair to those who may be delisted later or, worse, after the May elections. This has happened before and it could happen again,” he added.

The senator was apparently referring to the case of Pangasinan Rep. Amado Espino Jr., whom the President publicly named in September 2016 as a protector of drug syndicates in his province.

The President eventually backpedaled and apologized to Espino, admitting that his subordinates who had prepared the so-called drug matrix were “negligent.”

Gordon, a lawyer, said it would be better for the Department of the Interior and Local Government to just bring criminal and administrative charges against suspected narcopoliticians instead of vilifying them publicly.

He warned that those who would release the names of politicians allegedly involved in the illegal drug trade may be held liable for libel.

“If I were [to make the decision], I would be very careful — unless I am really sure [of their involvement]. It would be wiser if I filed a case instead of announcing the names of those [on] the list,” Gordon said in a radio interview.

“For me, the real issue there is you are accusing somebody without the due process of law. That’s the most basic,” he said.

Besides, he added, the government may suspend or remove elected officials by filing an administrative case against them for being “notoriously undesirable” public officers.

“There are other things that they can do so that the administration will not be accused of politicking. We want a level playing field,” Gordon said. “We should treat everybody equally because we’re in a democracy.”

Last week, Año said he would meet with officials of the Philippine Drug Enforcement Agency and the Dangerous Drugs Board before publicly releasing the names of politicians with alleged links to drug syndicates.

Año said he would make sure that the list would be thoroughly vetted as ordered by the President.

Jacqueline de Guia, spokesperson for the CHR, on Sunday said the government, if it really had enough evidence, should just file charges against the politicians on the list instead of subjecting them to trial by publicity.

“If there is enough evidence for the government to put names [on] a supposed narcolist, then the just way to proceed is to file appropriate charges against these [officials] to make them accountable,” De Guia said.

She warned that publication of the list could lead to violence during the campaign.

“The last thing we want to happen is [the eruption of] violence because of the release of [the] list [during the election season—a usually violent period],” she said.

While the CHR recognizes the efforts of the government to help voters choose “only deserving, law-abiding candidates,” De Guia said the government would do well to remember that everyone is innocent until proven guilty. —WITH A REPORT FROM PATRICIA DENISE M. CHIU