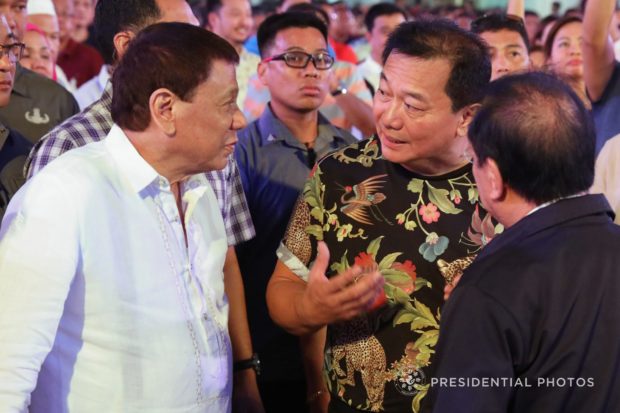 People have been asking this question here as reports made the rounds on social media citing signs that the President had junked Alvarez, who was ousted from his post as speaker of the House of Representatives (HR) in a coup reportedly set into motion by the President’s daughter, Davao City Mayor Sara Duterte-Carpio, in July last year.

Alvarez, who had a tiff with the President’s daughter before his ouster, is seeking reelection for Davao del Norte’s first district, a post that would pit him against Anthony del Rosario, the incumbent governor of Davao del Norte, who has been fielded by Sara’s regional political party Hugpong ng Pagbabago (HNP).

Del Rosario is a cousin of Davao del Norte 2nd District Rep. Antonio “Tony Boy” Floirendo Jr., whom Alvarez had earlier sued for graft over the lease of the government’s Davao Prison and Penal Farm (formerly Davao Penal Colony) to the Tagum Agricultural Development Co. (Tadeco), which is owned by the Floirendo family.

The Floirendo family was the top financier of the 2016 presidential campaign that brought the former Davao City mayor to power.

The reports that the President was withdrawing his support from Alvarez were triggered by the remark the President made in a PDP-Laban rally Cebu that he had given his daughter, the Davao City mayor, full control of the family’s political decisions.

“Inday is the one who is making the [family] decisions now,” the President said in a PDP-Laban rally in Cebu City’s Plaza Independencia on Feb. 24, a Sunday. “Inday controls [the family decisions[. I will not argue with Inday, though. She also did something that I wasn’t too pleased about,” the President said, referring to the ouster of Alvarez as speaker.

If the President would not argue with daughter Sara about whom to support in the 2019 elections, would he be supporting Sara’s HnP bets in May?

No one from among Davao del Norte’s competing political camps, however, dared release a statement to shed light on what was going on.

But a source from the camp of Floirendo said the President had a meeting with Floirendo at the Villamor Air Base in Pasay on Thursday, where the President expressed his willingness to endorse Floirendo.

The Floirendo camp had released photographs of the meeting, where the President was flanked by Floirendo on his left and Anthony del Rosario, on his right, and with Sara on the far right, raising their hands.

The Inquirer had repeatedly called the Alvarez camp for answers, but nobody returned the call.

Inquirer called the number of the former speaker’s chief of staff three times and dropped a message on his Facebook pages, including the verified campaign pages. But there was no reply as well.

The Floirendo camp refused to issue an official statement.

“It was a choice between a daughter and a wayward friend,” said the source from the Floirendo camp who preferred not to be named for lack of authority to speak on the matter. “Who do you think the President would choose?” –With a report from Mart Sambalud, Inquirer Mindanao