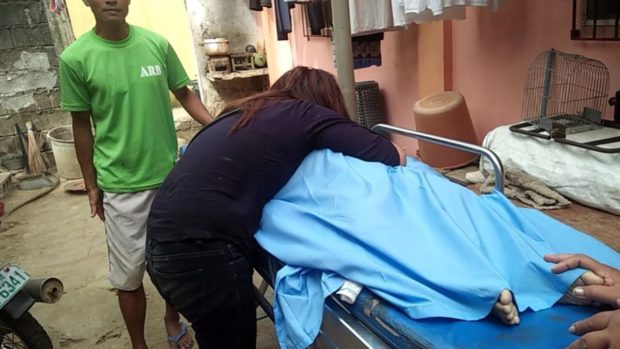 Rovelyn Uy, 28, weeps over her child who was fatally stabbed in Mobo, Masbate. PHOTO FROM Police Regional Office 5

MANILA, Philippines — A three-year-old child was fatally stabbed by his granduncle early Sunday in Mobo in the province of Masbate after taking him and his mother hostage.

According to the police report, the suspect Magdaleno Bustamante went inside the room of his niece Rovelyn Uy, 28, and her three-year-old son at around 3:30 a.m., armed with a knife and had threatened to kill them.

Chief Insp. Malou Calobaquib of the Police Regional Office 5 told INQUIRER.net that Bustamante arrived in Masbate from Manila on Saturday to stay at the house of the victims in Brgy. Poblacion 2 in Mobo.

Personnel of the Mobo City Police Station and the Special Weapons and Tactics (SWAT) team responded to the reported hostage-taking incident and secured the area.

Calobaquib added that the suspect requested that he be given multiple guns with ammunition and while authorities were negotiating with Bustamante, he suddenly stabbed his three-year-old grandnephew.

This prompted the SWAT team to shoot the suspect which led to his instantaneous death.

Meanwhile, police said the victim was rushed to the Masbate Provincial Hospital but later died while being treated.

The incident is still under further investigation as of writing. /je