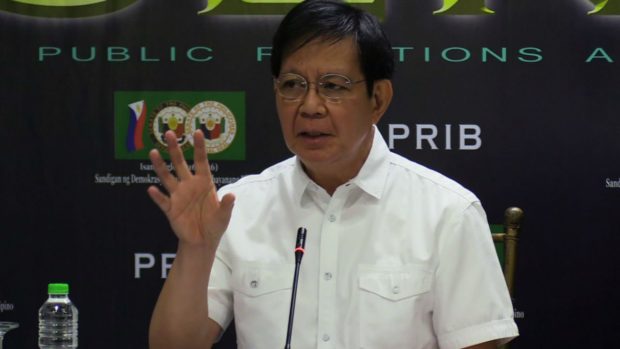 [That’s the responsibility of law enforcement — to make sure that nothing bad will happen to bishops and other citizens. The police motto, after all, is to “serve and protect.”]

Lacson was reacting to the remark of President Rodrigo Duterte that he had received a text message from Manila Archbishop Luis Cardinal Tagle stating that Caloocan Bishop Pablo Virgilio David and other priests had received death threats.

On hearing the news, the President urged the public to not harm bishops and priests, saying his arguments with the Catholic Church was “personal.”

[This is my answer: My quarrel with the Catholic Church is personal. You addicts, don’t hit the bishops and cardinals. They’re not part of this political ruckus.]

Lacson also took issue with the President’s remarks, saying it should be clear whether his statement was a joke as other people might take it seriously.

[Sometimes he says things that might sound true to people. For example, he might say: Confront bishops, they have a lot of money, kill them. Some crazy cop, for example, might think: “I might get promoted if I kill a bishop.” That’s dangerous.]

The President had previously renewed his attacks against bishops, saying useless religious leaders should be killed. /atm