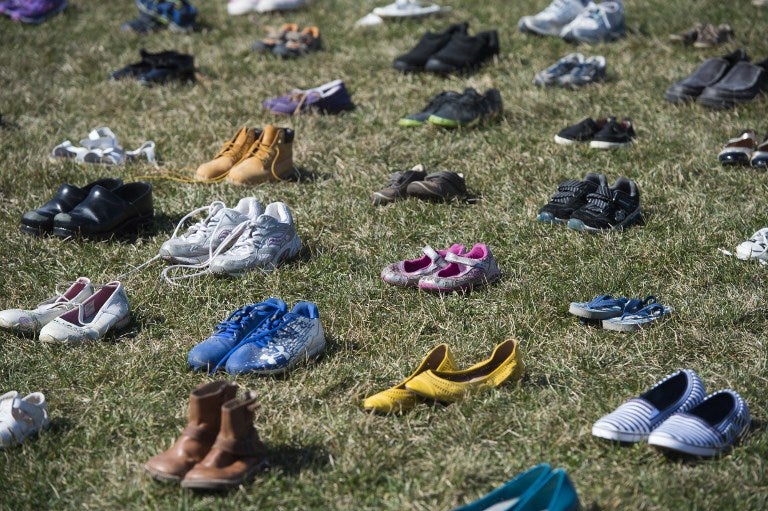 The lawn outside the US Capitol is covered with 7,000 pairs of empty shoes to memorialize the 7,000 children killed by gun violence since the Sandy Hook school shooting, in a display organized by the global advocacy group Avaaz, in Washington, DC, March 13, 2018. (AFP)

WASHINGTON — The House put on a display of Democratic priorities this week with two bills to bolster background checks on firearms purchases, showing just how quickly the politics of gun control have turned.

Just a few years ago, says Kris Brown, the president of one of the nation’s leading gun violence prevention groups, there was a “sense of hopeless” after a divided Congress tried — and failed — to change gun laws following the mass shooting of 20 young children and six adults at Newtown Elementary School in Connecticut.

But a new generation of teen leaders “flipped” public sentiment after the shooting last year at Marjory Stoneman Douglas High School in Parkland, Florida, she said, helping to elect lawmakers in 2018 who are willing to buck the powerful gun lobby, including the National Rifle Association.

“We’re at a completely different time,” said Brown, the president of the Brady, the group formerly known as the Brady Campaign to Prevent Gun Violence. The group changed its name this week on the 25th anniversary of implementing its landmark background check bill.

Parkland “reignited something in people,” she said in an interview after the House votes on Thursday. Democrats — and some Republicans — “understand this is where American sentiment is going and what people want.”

On Thursday, the House approved legislation to allow a review period of up to 10 days for background checks on firearms purchases.

Democrats led passage, 228-198, with a handful of defections and scant Republican support. The bill stems from the 2015 shooting at Emanuel AME Church in South Carolina, where nine black worshippers died at the hands of a white supremacist. A faulty background check allowed the gunman’s firearm purchase after the required three-day review period expired.

On Wednesday, the House approved a more ambitious measure — bipartisan legislation requiring federal background checks for all gun sales and transfers, including those sold online and at gun shows. A handful of Republicans crossed over to join Democrats. It’s the most substantial gun violence prevention bill in more than a decade.

Not all Democrats helped in passing the bills, and some broke with their party to back a Republican counter-effort Thursday to maintain the three-day review period for victims of domestic violence seeking guns.

But the outcome showcased a turn of events as Democrats — and some Republicans —more fully support gun control measures they were hesitant to tackle even a few years ago.

The NRA acknowledges the challenges ahead. But the Second Amendment group also downplays the momentum of the gun control advocates, especially since the White House has threatened to veto the bills. The measures are likely to languish in the Republican-controlled Senate.

The NRA’s Chris Cox said in a statement that the group “will continue to fight to preserve the constitutionally protected right to self-defense.”

The NRA spent more money than ever to help elect Trump, who in 2017 became the first president in decades to speak at their annual convention. And while the group was outspent by gun-safety advocates in the 2018 midterm that ushered Democrats into power in the House, it says its deepest asset is the millions of Americans who are Second Amendment advocates.

“The strength of the NRA has always been with our grass roots,” said spokeswoman Jennifer Baker, “and our tens of millions of members and supporters who consistently go to the polls and vote on this issue and actively engage with their elected officials.”

Polling, though, shows attitudes are shifting. A survey conducted by The Associated Press-NORC Center for Public Affairs Research last year found that nearly 7 in 10 adults favored stricter gun control measures. That was the strongest level of support since The Associated Press first asked the question five years ago.

Gabby Giffords, the former Arizona lawmaker who was severely wounded in a 2011 shooting and now runs a gun advocacy group bearing her name, said in a statement that the votes this week show “how serious the new majority in the House of Representatives is about taking action to make our communities safer from gun violence.”