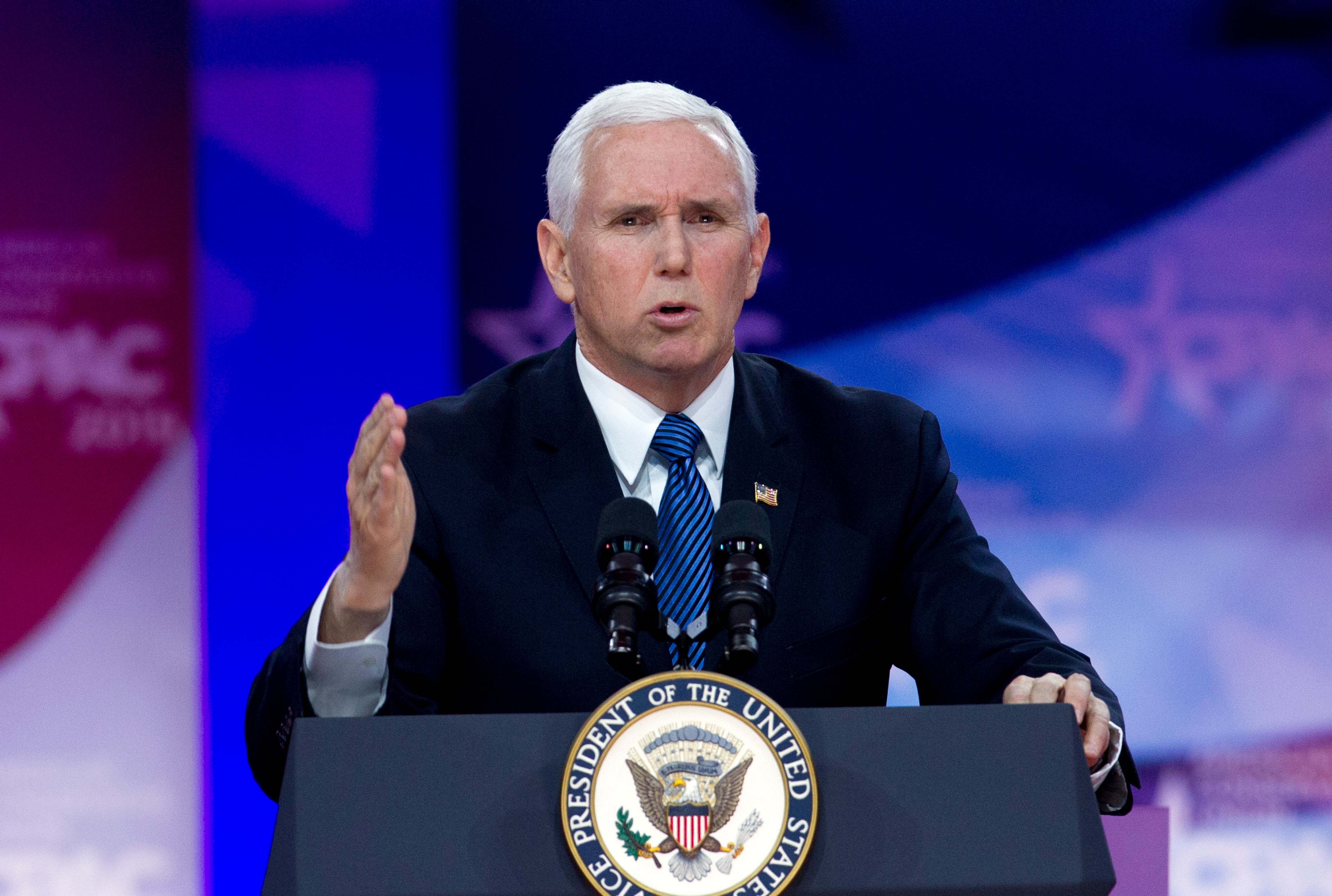 WASHINGTON — As the White House gears up for the 2020 campaign, it’s pressing the case that Democrats are rallying behind what it’s calling the policies of “socialism.”

Trying to portray Democrats as out of step with ordinary Americans, Vice President Mike Pence said in a speech Friday at the Conservative Political Action Conference that the choice in the next election is “between freedom and socialism, between personal responsibility and government dependence.”

It was the latest step in a coordinated effort by President Donald Trump and his allies to drive up enthusiasm among the GOP base by sowing fears about the policies pushed by Democrats.

Pence also took aim at “Medicare-for-all” and the Green New Deal, policy proposals prominent in the crowded Democratic contest for the presidential nomination.

The Medicare proposal really means “quality health care for none,” Pence said. And “the only thing green” about the Democrats’ environmental framework to combat climate change, the vice president said, “is how much green it’s going to cost taxpayers if we do it: $90 trillion.”

The American Action Forum, a Republican-linked think tank, has estimated that the Green New Deal could cost $51 trillion to $93 trillion over 10 years. Democrats have not specified a price tag, though Rep. Alexandria Ocasio-Cortez of New York, who introduced the plan along with Massachusetts Sen. Ed Markey, said it would be “the same way we paid for the original New Deal, World War II, the bank bailouts, tax cuts for the rich and decades of war — with public money appropriated by Congress.”

The health care and climate proposals have become litmus tests in the race for the Democratic nomination, with many liberals embracing the ideas even as some pragmatists raise questions about cost and feasibility.

White House economic adviser Larry Kudlow said at the conference Thursday that Americans should “put socialism on trial and then convict it.” Trump was expected to deliver a similar message when he addresses the conference on Saturday.

A Trump campaign official said the campaign was exploring ways to use the “socialism” message to drive a wedge between Democratic voters and independents. The official spoke on the condition of anonymity to describe internal planning.

The campaign also believes that the attacks will activate Trump’s base, which may have lost some motivation because the president has run into congressional opposition as he tries to fulfill his U.S.-Mexico border wall promise.

The head of the Republican National Committee, Ronna McDaniel, told the conference on Thursday that the GOP would look to “go out and educate” voters about socialism.

Responding to Pence’s socialism accusation, Massachusetts Sen. Elizabeth Warren said: “This is no surprise. It’s nonsense, but Donald Trump and Donald Trump’s minions will do whatever they think helps Donald Trump. That’s all that’s going on here.”

Pence called Sen. Bernie Sanders, the Vermont independent who is making a second run for the Democratic presidential nomination, an “avowed socialist,” though Sanders identifies as a “democratic socialist,” calling for sweeping social programs to help reduce income inequality. Pence added Sanders that epitomized Democratic candidates and officials who “have papered over the failed policies of socialism with bumper-sticker slogans and slick social media campaigns.”

Sanders fired back in a missive to his vast small-dollar donor list, encouraging them to give to his campaign in Pence’s “honor” and saying Pence was targeting them because his “campaign is the strongest and most powerful challenge to Trump’s re-election.”

The White House has tried to cite the political chaos in Venezuela, where moderates backed by the Trump administration are challenging the socialist government of Nicholas Maduro after years of economic collapse, as a warning sign about the consequences of Democratic policies in the United States.

A Gallup poll from last August found that 37 percent of Americans feel positive about socialism, a share little changed over the past decade. Nearly 6 in 10 Democrats (57 percent) reported having a positive view of socialism, more than three times the share of Republicans (16 percent).

According to Gallup, young adults are especially likely to view socialism positively. About half of Americans under 30 (51 percent) and 41 percent of those age 30 to 49 reported feeling positive on that topic, compared with about 3 in 10 of those 50 and older.