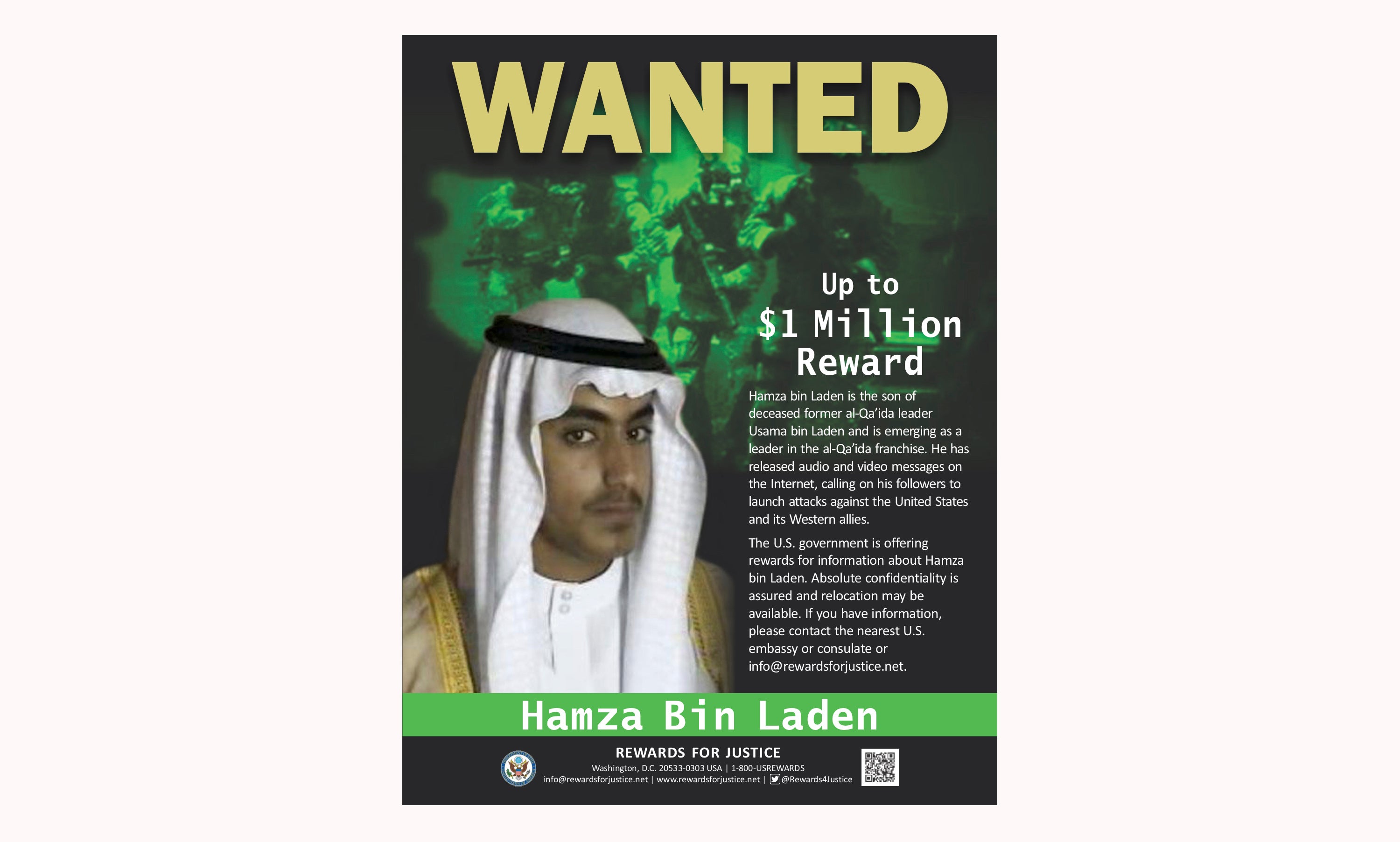 This wanted poster released by the U.S. Department of State Rewards for Justice program shows Hamza bin Laden. Saudi Arabia announced Friday, March 1, 2019 it had revoked the citizenship of bin Laden, the son of the late al-Qaida leader who has become an increasingly prominent figure in the terror network. (Rewards for Justice via AP)

DUBAI, United Arab Emirates — Saudi Arabia announced Friday it had revoked the citizenship of Hamza bin Laden, the son of the late al-Qaida leader who has become an increasingly prominent figure in the terror network.

There was no immediate explanation why the royal decree stripping his citizenship, signed in November, was only becoming public now. However, the announcement comes after the U.S. government on Thursday offered a $1 million reward for information leading to his capture as part of its “Rewards for Justice” program. He also was added Thursday to a United Nations Security Council terrorism sanctions list.

The kingdom similarly stripped Osama bin Laden’s citizenship in 1994 while he was living in exile in Sudan when Hamza bin Laden was just a child. Where he is now remains in question.

“This is an example of history rhyming,” said Thomas Joscelyn, a senior fellow at the Washington-based Foundation for Defense of Democracies who studies al-Qaida and the Islamic State group. “He’s basically born right after al-Qaida is founded, so his life is totally consumed in the establishment, the formation of al-Qaida and the launching of its war against the West and America.”

Saudi Arabia revoked Hamza bin Laden’s citizenship in November, according to a circular by the Interior Ministry quietly published Friday by the country’s official gazette. State-run media in the kingdom did not report on the decision.

Bin Laden is believed to have been born in 1989, the year of the Soviet withdrawal from Afghanistan, where his father became known among the mujahedeen fighters. His father returned to Saudi Arabia and later fled to Sudan after criticizing the kingdom for allowing U.S. troops to deploy in the country during the 1991 Gulf War. He later fled Sudan for Afghanistan in 1996, where he declared war against the U.S.

As leader of al-Qaida, Osama bin Laden oversaw a series of attacks, including the 1998 bombings of the U.S. embassies in Kenya and Tanzania, as well as the bombing of the USS Cole off Yemen. He and others plotted and executed the Sept. 11, 2001 attacks on New York and the Pentagon, which led to the U.S. invasion of Afghanistan. U.S. Navy SEALs ultimately killed bin Laden in a raid on a house in Abbottabad, Pakistan, in 2011.

For Hamza bin Laden, now believed to be around 30, his father initially worried for his safety and thought to send him away for study, but his son instead “wants to get into the fight,” Joscelyn said. He’s then sent away for explosives training in Pakistan.

Video released by the CIA in 2017 that was seized during the Abbottabad raid shows Hamza bin Laden with a trimmed mustache but no beard, at his wedding. Previous images have only shown him as a child. The State Department said in its announcement Thursday about the $1 million bounty on him that it believes he married the daughter of Mohamed Atta, the lead hijacker in the Sept. 11 attacks.

Hamza bin Laden began appearing in militant videos and recordings in 2015 as an al-Qaida spokesman.

“If you think that your sinful crime that you committed in Abbottabad has passed without punishment, then you thought wrong,” he said in his first audio recording.

The U.N. Security Council committee in charge of al-Qaida-related sanctions said Thursday that Hamza bin Laden’s prominence has grown in recent years, calling him “the most probable successor” to lead a potential new version of the terror group.

His addition to the sanctions list subjects him to a travel ban, asset freeze and arms embargo that all U.N. member states are obligated to enforce.

A U.N. report published last year suggested both he and Ayman al-Zawahiri, who took over al-Qaida after Osama bin Laden’s death, “are reported to be in the Afghanistan-Pakistan border areas.”

“Al-Qaida’s leadership demonstrates strategic patience and its regional affiliates exercise good tactical judgment, embedding themselves in local issues and becoming players,” the U.N. report warned. “While there is as yet little evidence of a re-emerging direct global threat from al-Qaida, improved leadership and enhanced communication will probably increase the threat over time.”  /muf