SWS: 71% of Filipinos believe gov’t is serious in solving EJK 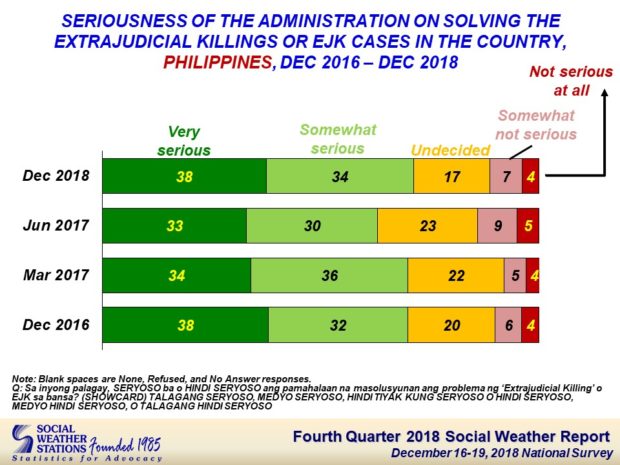 MANILA, Philippines — Most Filipinos (71 percent) believe that the Duterte administration is serious in solving the problems of extra judicial killings (EJK) in the country,  a  Social Weather Stations (SWS) survey released on Friday showed.

In a December 2018 survey, 38 percent of Filipinos said the government is very serious about solving the EJK problem while 34 percent said they are somewhat serious.

SWS also found that 17 percent of Filipinos were undecided on the issue.

Respondents who believe that the government is serious about solving the EJK problem were highest in President Rodrigo Duterte’s home region (Mindanao), with 42 percent saying the government is very serious in addressing the issue. Meanwhile,  33 percent are somewhat serious.

The poll had a sampling error margins of ±3 percent for national percentages, ±4 percent for Balance Luzon, and ±6 percent each for Metro Manila, Visayas, and Mindanao.