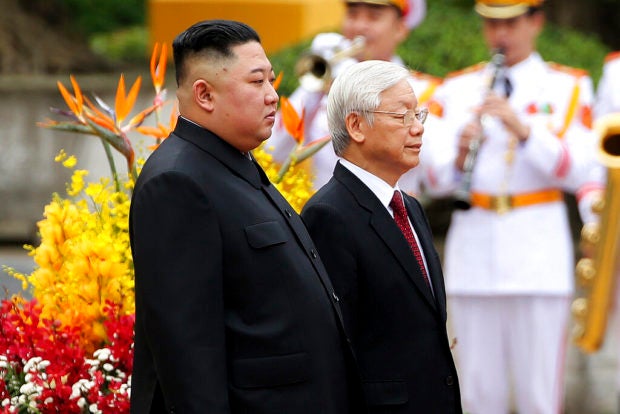 HANOI, Vietnam — A day after his stunning summit breakdown with Donald Trump, North Korean leader Kim Jong Un smiled broadly as he strode down a red carpet with Vietnam’s president Friday, a military band playing as stiff-backed soldiers goose-stepped by.

With Trump back in Washington, and both countries spinning their version of what happened during one of the most high-profile diplomatic collapses in recent years, Kim seemed confident and poised — a world leader taking his place on the international stage — as he stepped out of his armored limousine, embraced President Nguyen Phu Trong, the country’s top leader and Communist Party chief, and accepted a bouquet of flowers from a beaming girl.

On Saturday he is expected to be driven back to the border with China where he will board his armored train for a 60-plus-hour trip, through the sprawl of China, back home to Pyongyang, North Korea’s capital. But Friday saw his black limousine rolling beneath fluttering Vietnamese and North Korean flags — the US ones have been mostly taken down — as a large crowd jammed the city’s streets and waved flowers.

Talks between Kim and Trump broke down on Thursday, the second day of their two-day summit, in a dispute over how much sanctions relief Washington should provide Pyongyang in return for nuclear disarmament steps. Despite a senior North Korean official’s suggestion — in a rushed, middle-of-the-night news conference called to dispute Trump’s version of the summit’s end — that Kim may have “lost the will” for diplomacy, the North Korean leader seems to have emerged from the diplomatic wreckage as a winner.

Kim stood shoulder-to-shoulder with Trump at the summit, an image that allows his propaganda services to portray him to his people and supporters as the leader of a nuclear-armed power, not an international pariah that starves its citizens so it can build nukes and missiles. He answered questions with humor and ease when confronted by an aggressive international media contingent here. And, crucially for his image at home, he stood firm on his demands for the relief of sanctions imposed over a nuclear program North Korea says it built in the face of unrelenting US hostility meant to end its leadership.

Kim, as he considers his next move after Hanoi, will also be backed by state-controlled media that were already busy portraying the summit as a victory for their leader, saying Kim and Trump “appreciated that the second meeting in Hanoi offered an important occasion for deepening mutual respect and trust and putting the relations between the two countries on a new stage.”

North Korea said it had asked for partial sanctions relief in return for closing its main nuclear site at Yongbyon, an important nuclear-fuel production facility but not the only place the North is believed to make bomb fuel.

The United States also put its interpretation on the summit breakdown, with senior officials saying that North Korea wanted billions of dollars in sanctions relief in return for only partial dismantlement of Yongbyon, and demanded the North scrap more of its nuclear program for such a high level of concessions.

It’s unclear what will come next: Working-level meetings among experts to close the negotiating gap? Another summit? Or will Trump, consumed with controversy in Washington and burned by the failure in Hanoi, lose interest?

The worst-case scenario would be a return to the personal insults and threats of war between Trump and Kim in 2017 as the North staged a series of increasingly powerful weapons tests, including a nuclear detonation and displays of long-range missiles that can target the U.S. mainland, though experts believe those ICBMs are not yet complete.

Trump maintained ahead of the Hanoi summit that the economic benefits of a deal could push Kim to give up his nuclear ambitions.

Kim came into the summit feeling confident that he could settle something that would end painful economic sanctions while letting him keep much of his nuclear program and only making a “a variety of gestures that mimic disarmament,” Jeffrey Lewis, a nuclear expert at the Middlebury Institute of International Studies at Monterey, wrote after the summit collapse. This outcome would be a signal that “the world must live with North Korea’s bomb, but Kim won’t rub it in anyone’s face.”

“Since it would be utter madness to try to topple a nuclear-armed dictator, it seems obvious which side should yield,” Lewis said. If Trump “does not accept the reality that we now live with a nuclear-armed North Korea, then we are doomed to the collapse of negotiations, and perhaps even a return to the terror of 2017.” /ee