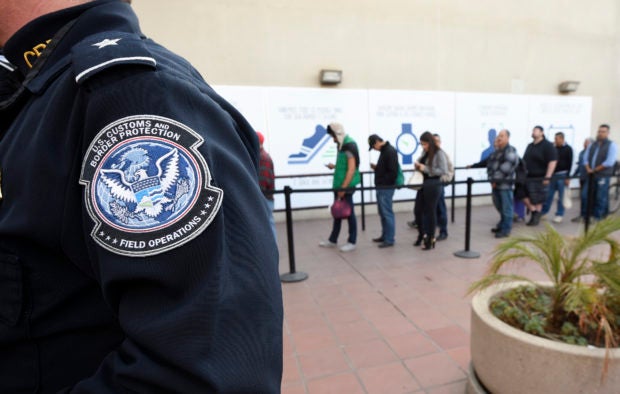 FILE – In this Dec. 10, 2015, file photo, pedestrians crossing from Mexico into the United States at the Otay Mesa Port of Entry wait in line in San Diego. The Trump administration is proposing rules that could deny green cards to immigrants if they use Medicaid, food stamps, housing vouchers and other forms of public assistance. The Department of Homeland Security said Saturday, Sept. 22, 2018, that current and past receipt of certain public benefits above thresholds will be considered “a heavily weighed negative factor” in granting green cards as well as temporary visas. (AP Photo/Denis Poroy, File)

WASHINGTON — Homeland Security officials have formally extended protections that allowed immigrants from four countries to live and work legally in the United States.

The move Thursday complies with a federal judge’s ruling that halted the decision to discontinue temporary protected status for people from Sudan, Nicaragua, Haiti and El Salvador.

The California judge ruled in October. The protections were set to expire in May, but will be extended until the preliminary injunction remains in effect.

Temporary protected status is granted to countries ravaged by natural disasters or war and lets citizens of those countries remain in the U.S. until the situation improves back home. About 300,000 people have received those protections.

Trump administration officials had moved to discontinue protections for many countries; several lawsuits have been filed. /jpv

US seeks to curtail green cards for immigrants on public aid

Read Next
DICT: Facebook to block ‘Momo Challenge’ in its platform
EDITORS' PICK
‘A greener, cleaner tomorrow’: A how-to guide for Filipinos who want to help with today’s energy crisis
Get exciting deals and discounts when you download the new McDonald’s App
FlipTop rapper Loonie freed on bail
Countries with confirmed cases of coronavirus
SM continues to send relief assistance to remote towns in Batangas
China expands lockdown against virus, fast-tracks hospital
MOST READ
Taal’s sulfur dioxide emission increases
No time for revelry; Tagaytay instead plans for alert level 5
Megan Young, Mikael Daez get married
Palace: US Senate move also made Duterte junk VFA
Don't miss out on the latest news and information.