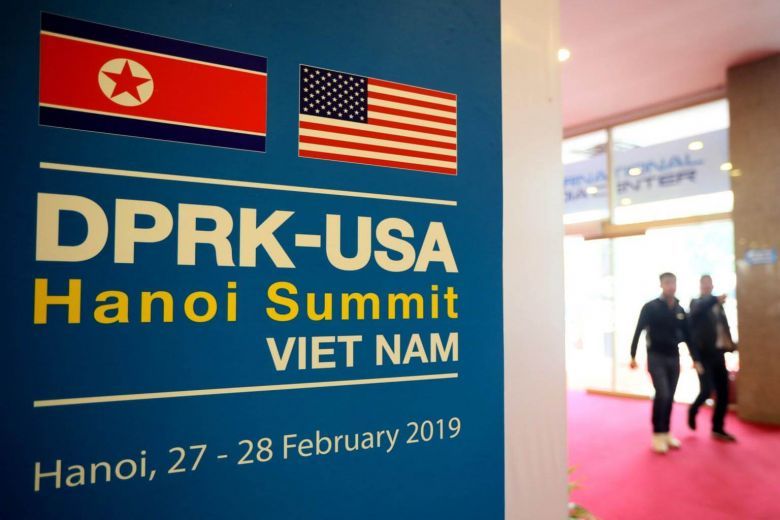 US President Donald Trump and North Korean leader Kim Jong Un are set to meet at least five times during the summit in Hanoi. The Straits Times Photo

HANOI — A one-on-one chat and dinner today will mark the beginning of the second meeting between United States President Donald Trump and North Korean leader Kim Jong Un, a day before they sit down in Vietnam to discuss the next step in North Korea’s denuclearization.

The two leaders arrived in Hanoi yesterday and are set to meet at least five times, as anticipation builds over whether they can agree on a deal to break the nuclear deadlock.

The US insists on sticking with sanctions until the North takes concrete steps such as submitting a list of nuclear weapons, while the North wants corresponding actions as it rolls back its program.

Although the venue for the meeting has not officially been announced, security has been beefed up around the Sofitel Legend Metropole Hanoi hotel.

National broadcaster Vietnam Television also dispatched crew there yesterday to lay cables for live feeds – suggesting the summit could be held at the luxury colonial hotel.

Mr Kim – who arrived in Hanoi after a dramatic 67½-hour train-and-car ride via China – has checked into the Melia Hanoi hotel. Mr Trump is staying at the JW Marriott hotel.

Both leaders are expected to meet the Vietnamese leadership during their time in Hanoi.

Mr Trump will greet Vietnamese President Nguyen Phu Trong and have a working lunch with Vietnamese Prime Minister Nguyen Xuan Phuc today, according to the White House. Mr Kim is expected to do the diplomatic rounds after his summit with Mr Trump.

South Korean analysts gathered in Hanoi for the summit urged the two leaders to show mutual trust and agree to a specific road map for both sides to implement corresponding measures leading to North Korea’s denuclearization.

They added that key items on the table could include the dismantlement of North Korea’s main Yongbyon nuclear facility, a peace declaration to end the 1950-53 Korean War, which was halted only by an armistice, and easing of some sanctions imposed on the North.

Dongguk University professor Koh Yu-hwan said the nuclear deadlock arose mainly from North Korea’s misinterpretation of the Singapore agreement. “North Korea views it as a phased, simultaneous approach… but the US said denuclearization must be front-loaded to build trust,” he said at a forum in Hanoi yesterday.

Noting recent efforts by both sides to bridge the gap between them, Prof Koh said the success of the summit will depend on whether the two leaders can agree to a road map for implementation of agreed measures.

Handong University professor Kim Joon-hyung said the end-of-war declaration was supposed to be a gift from the US in return for North Korea closing its Tongchang-ri missile test site.

“But then the US thought it didn’t match up and wanted a list of nuclear weapons as well. Now, North Korea is saying they can provide the Yongbyon card too, but they can’t exchange it with just an end-of-war declaration; they also want sanctions lifted.”

If Yongbyon can be included in the agreement with a deadline, the summit can be considered a great success, he added.